The huge posters carrying images of the Bipin Rawat and his wife Madhulika along with the slogan 'amar rahe' (long live) were hung from poles and trees on Kamraj Marg and other streets in Lutyens' Delhi. 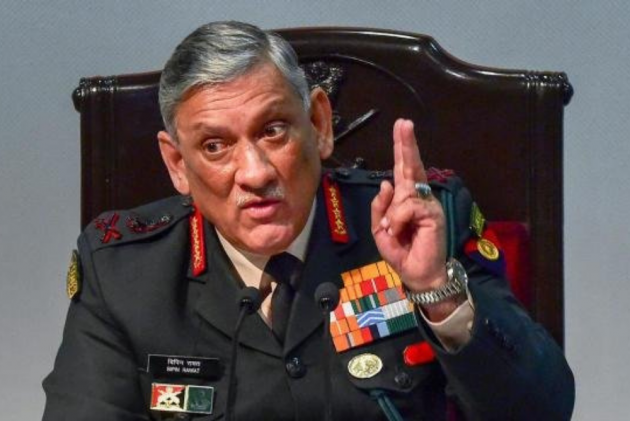 Several posters paying homage to Chief of Defence Staff Gen Bipin Rawat and his wife Madhulika Rawat were on Friday put up in streets near his official residence in Delhi.

The huge posters, only carrying images of the couple and slogan 'amar rahe' (long live) were hung from poles and trees at a roundabout on Kamraj Marg and other streets in Lutyens' Delhi.

The official residence of the CDS is at 3, Kamraj Marg, where the mortal remains of Gen Rawat and his wife, were kept on Friday for people to pay their final respects.

Enroute to Brar Square there are hundreds of posters paying homage to Gen. Rawat. pic.twitter.com/kIMobHzSZo

Their cremation later took place at Brar Square crematorium in Delhi Cantonment, two days after they were killed with 11 others, all from the armed forces, in a helicopter crash in Coonoor, Tamil Nadu.

In the morning, ambassadors, military attaches of several foreign countries also visited to pay homage to Gen Rawat and his wife.

Earlier in the day, right outside his official residence at 3, several people who had gathered and raised slogans of 'Bharat Mata Ki Jai', 'General Rawat amar rahe', and 'Uttarakhand ka heera amar rahe', while a stream of dignitaries paid floral tributes and last respects till the funeral procession left the bungalow.

A Hindu outfit had put up a series of posters in a row, bearing an image of Gen Rawat, on a pavement near the main entrance of the official bungalow. Garlands were put up on these posters.