CDS Bipin Rawat air crash: Even as more developments continue to be reported from Cunnoor where the crash occurred, politicians and leaders have started reacting to the news on social media. 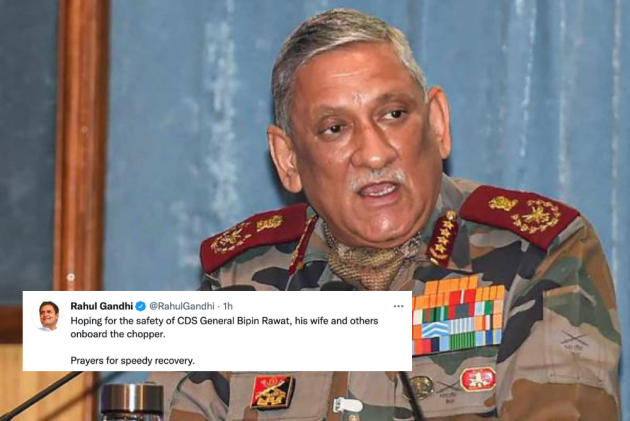 On Wednesday, a chopper carrying top defence officials including Chief of Defence Staff Bipin Rawat crashed in Tamil Nadu's Nilgiri district. According to reports, four bodies have been recovered from the crash site. However, the condition of Rawat is not yet known.

Even as more developments continue to be reported from Cunnoor where the crash occurred, politicians and leaders have started reacting to the news on social media.

From Congress leader Rahul Gandhi to several state chief ministers tweeted their prayers and well wishes for Rawat and those on-board. While reports about the occupants of the flight are notyet confirmed, Gandhi's tweet suggested that Rawat's family was also on board the flight.

Trinamool Congress' Mamata Banerjee was also among those to convey her concern. The West Bengal Chief Minister reportedly stopped an administrative review meeting mid-way after she got news of General Rawat's chopper crash.

Hoping for the safety of CDS General Bipin Rawat, his wife and others onboard the chopper.

Extremely sad to see the images of the chopper crash with CDS Bipin Rawat and his wife on board. Praying for the safety of all.

Today, the entire nation prays for the safety of those who were onboard including CDS Bipin Rawat and his family members. Also praying for the speedy recovery of everyone who was injured.

I am shocked to learn that an Army helicopter carrying Chief of Defence Staff General Bipin Rawat Ji and 13 others has crashed in Tamil Nadu. My thoughts and prayers are with those who were onboard.

Official sources in Coimbatore said four bodies have been retrieved and three persons rescued from under the debris of the helicopter which crashed in Katteri-Nanchappanchathram area near Coonoor in the hilly Nilgiris district.

Defence Minister Rajnath Singh is monitoring the situation after an Indian Air Force helicopter with Chief of Defence Staff Gen Bipin Rawat, his wife and several other offficers on board met with an accident on Wednesday near Coonoor in Tamil Nadu. According to reports, Singh has briefed Prime Minister Narendra Modi about the crash and the Indian Air Force chief has been asked to reach the site.