Voting should be done only after removing face veil of the burqa so that the identity could be matched with the voter cards, suggests BJP candidate 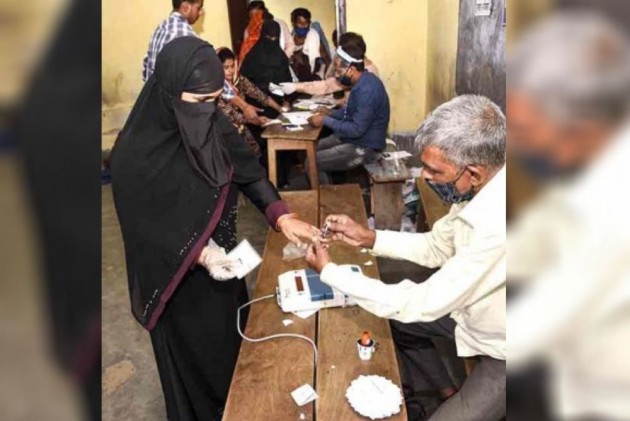 BJP candidate Sangeeta Chauhan alleged that "fake voting" was going in the Naugaon Sadat assembly bypoll in Uttar Pradesh on Tuesday, demanding that those wearing the burqa should remove the face veil so that their identity could be matched.

Chauhan demanded that this type of "fake voting" should be stopped as it was "very dangerous" for democracy.

"Fake voting is going on, but the administration is unable to understand this," she told reporters. "We are repeatedly saying this, but no one is listening to us."

Chauhan suggested that the voting should be done only after removing face veil of the burqa so that the identity could be matched with the voter cards, adding that the process was justifiable.

Chief Electoral Officer Ajay Kumar Shukla told PTI that he would look into the allegations.

Naugaon Sadat in Amroha district seat fell vacant after the death of cabinet minister and former cricketer Chetan Chauhan. The BJP has fielded his wife Sangeeta Chauhan for the bypoll, hoping to cash in on the sympathy votes.

There are as many as 14 candidates in the fray for the by-election.

Thousands of people on Tuesday battled coronavirus fears and queued up outside polling booths across 10 states to vote in by-elections to 54 assembly constituencies, including seven in Uttar Pradesh.