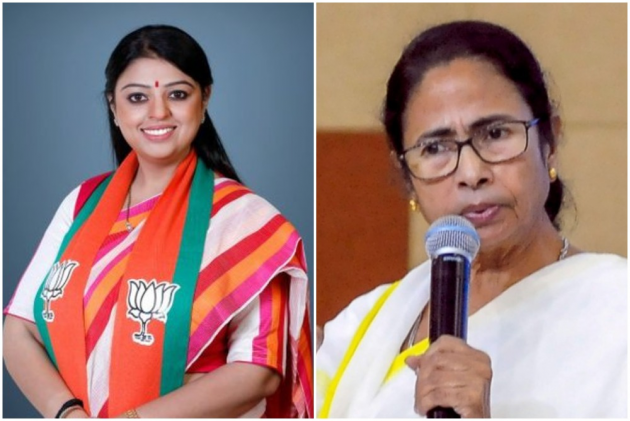 With Tibrewal in the fray, the BJP is likely to make political violence by the ruling party on BJP members and supporters as their key poll issue, a senior leader of the BJP's state unit said.

Who Is Priyanka Tibrewal, BJP's Pick Against Mamata Banerjee In Bhabanipur?

Tibrewal had contested the March-April 2021 assembly general election from Entally constituency in Kolkata but lost by a massive margin of 58,257 votes. She got only 27.7% of the polled votes.

The bypoll in Bhowanipur was necessitated due to the resignation of Shobhandeb Chattopadhyay, a TMC veteran who contested from the chief minister's home turf as she went to contest from Nandigram in East Midnapore district, 170 km southwest of her home. She lost to her one-time confidante, the BJP candidate Suvendu Adhikary, by a small margin of 1,956 votes. The counting was marred by controversies as Banerjee's name initially came out as the winner but eventually, Adhikary was announced as the victor. The TMC has challenged the counting in the Calcutta high court.

Shobhandeb Chattopadhyay, who is also a third-term minister in her cabinet, resigned from Bhowanipur Assembly soon after the government was formed. He is slated to contest from Khardah in Kolkata's neighbouring North 24 Parganas district once the bypoll is announced there. The TMC's Khardah winner died before the results were announced.

In Bhowanipur, Banerjee has already started her campaign once the bypoll was announced.

But the real campaign had started months ago. Bhowanipur was the first among Kolkata's localities to complete vaccination for the above 45 age group. Ministers Chattopadhyay, Firhad Hakim and Aroop Biswas are visiting different localities.

Tibrewal has been associated with the BJP, especially the party's legal cell, for quite a few years, and also serves as a spokesperson for the party for speaking to national and regional media houses.

In the May 2021 election, Chattopadhyay won Bhowanipur by 28,719 votes, bagging 57.71 per cent of the polled votes. Of the eight municipal wards that make the constituency, the TMC had a lead in six. Mamata Banerjee won this seat in 2011 and 2016.

The BJP had a difficulty in finding a suitable candidate for the Bhowanipur by-poll, as most senior leaders declined to contest an election that they thought they were highly unlikely to win. The BJP's state unit president had admitted before the media that many known faces were unwilling to contest.

Banerjee on Friday filed her nomination for the  Bhowanipur assembly constituency by-polls scheduled on September 30.

Banerjee was accompanied by the wife of state cabinet minister Firhad Hakim at Survey Building in Alipore where she filed her nomination papers.

She was later seen greeting people with folded hands before boarding her car.

“The people of Bhowanipur are eagerly waiting to rewrite history by ensuring Mamata Banerjee’s victory by a record margin. They are waiting to avenge the conspiracy that was hatched to defeat Mamata di at Nandigram,” Firhad Hakim told reporters.

“For us, the challenge is not victory as we are confident about it. The challenge is to ensure Didi’s win by a record margin,” another TMC worker said.

Banerjee, a resident of Bhowanipur, had won the seat twice in 2011 and 2016 but shifted to Nandigram, where the anti-farmland acquisition movement against the Left Front government had transformed her into a major political force in the volatile state, to dare her former protege and now a BJP leader Suvendu Adhikari on his home turf. Though Banerjee powered the TMC to a resounding win for a third straight term in office, she lost in Nandigram.

She now must win Bhowanipur to ensure an unbroken stint as the chief minister.

Banerjee is required to win a seat in the state assembly by November 5 in conformity with the constitutional provisions in order to continue as chief minister. The Constitution allows a non-member of a state legislature or Parliament to continue in a ministerial position without getting elected only for six months.

After her defeat in Nandigram, Sovandeb Chattopadhyay, state cabinet minister and TMC MLA from Bhowanipur, vacated the seat to facilitate her return to the assembly from there.

Banerjee was first elected to the Assembly in a by-poll from Bhowanipur months after the TMC stormed to power ousting the 34-year-old Left Front dispensation in 2011.

She represented South Kolkata Lok Sabha seat, of which Bhowanipur is a segment, six times.

Elections will also take place on the same day at Jangipur and Samsherganj constituencies in Murshidabad district where elections could not take place in April due to deaths of candidates. The TMC is being seen as the favourite in those seats, too. (With PTI inputs)