‘When the administration failed to act on complaints, we thought we should ourselves do something,’ says BJP leader Manzoor Ahmad Bhat. 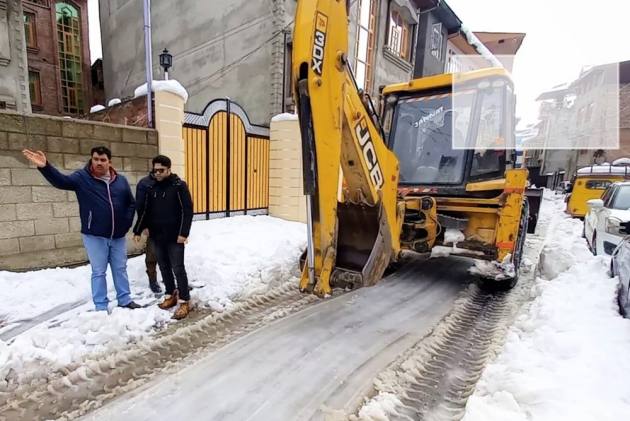 The BJP today said it hired JCBs to clear roads blocked by heavy snow in Srinagar, contradicting the Jammu and Kashmir administration’s claim that it was making efforts to do.

“We established a helpline to forward complaints of people to the administration. We got a lot of complaints. Some people were unable to reach hospitals. Some people were unable to come out of their homes to buy essential food items due to accumulated snow on the roads, lanes, and by-lanes. We forwarded all these complaints to the administration. But they failed to act upon them and then we thought we should ourselves do something and we hired JCBs to clear snow,” BJP leader Manzoor Ahmad Bhat told Outlook.

He said he said he pressed the JCBs in Jawhar Nagar, Solina and Lasjan areas to clear snow from the roads. Bhat said he personally realized the departments entrusted to clear snow have failed to do their job after visiting various areas and it prompted him to hire the JCBs.

"On Thursday morning I decided I should provide some relief to people in several areas and it was widely appreciated," he said.

"Till Thursday afternoon, we cleared inner roads in Ikrajpora, Lasjan, Jawaharnagar and Solina areas and similarly, snow from other adjoining areas will be cleared,” Bhat said. He said they were getting calls from various areas and accordingly working.

Another BJP leader and its former spokesman Khalid Jehangir tweeted, “The government headed by  @manojsinha_ @OfficeOfLGJandK should make public how much money has been spent on clearing the snow across Kashmir since Jan 3 2021 when snowfall commenced. Will also file RTI..”

Former Chief Minister Omar Abdullah said even the BJP is dissatisfied with snow clearance in Kashmir. “In fact they’ve gone a step further & alleged financial malfeasance. So much for all the press notes & social media back slapping by the administration claiming to have done an amazing job after the snow storm,” Abdullah tweeted.

Meanwhile, Kashmir divisional commissioner Pandurang K Pole conducted a tour of Srinagar to take stock of snow clearance work and restoration of essential services. He also visited Srinagar International Airport and took stock of the resumption of flights which remained suspended for the past three days due to heavy snowfall. He said work to clear snow should continue round the clock to give immediate relief to the public.

He instructed his officials to ensure smooth flow of traffic on all main roads and also that people did not park on the roadside to avoid snarls.