'Matbhed' (difference of opinion) has not changed into 'manbhed' (change of heart), Amit Shah said. 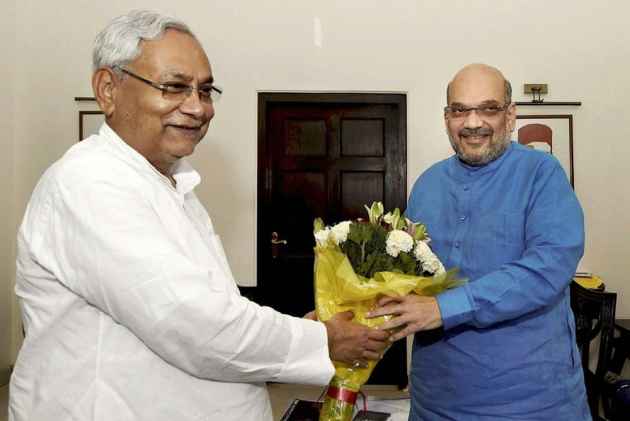 Setting to rest speculation over the fate of his party's tie-up with the Janata Dal (United), BJP president Amit Shah asserted on Thursday that their alliance is "atal" (firm) and that it will fight the Bihar assembly elections next year under the leadership of Chief Minister Nitish Kumar.

"The JD(U)-BJP alliance is 'atal'. Both parties will go to the elections together and we will fight under the leadership of Nitish Kumar. This is clear as far as Bihar is concerned," Shah told News18.

He was asked if the BJP is considering fighting the state election, slated to be held by the end of next year, on its own.

Kumar, who is also the JD(U) president, has been at the receiving end of criticism from some BJP leaders, including Union Minister Giriraj Singh, over a host of issues. A section of saffron party leaders even pitched for Kumar making way for a BJP leader at the helm in the state.

In turn, JD(U) leaders had been hitting back at their BJP critics.

Shah played down the unease in the alliance, saying it is natural for some differences to crop up at the local level and that this is an indication of a healthy alliance.

'Matbhed' (difference of opinion) has not changed into 'manbhed' (change of heart), he said.

Shah's unambiguous endorsement of Kumar's leadership of the alliance in Bihar is likely to end the bickering among their leaders.

After Kumar decided to keep his party out of the Modi government, apparently to protest the offer of only one ministerial berth to his party, the saffron alliance in Bihar has been marked by a sense of unease.