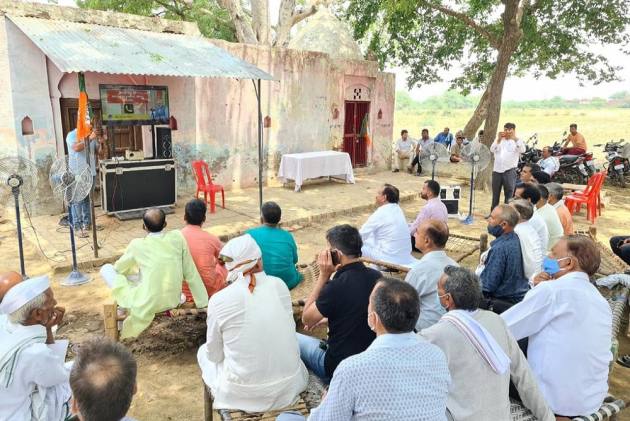 “We listened to the honourable Prime Minister along with villagers Sunday morning and later had a very fruitful interaction with them,” said Rajkumar Chahar, national president of the BJP’s Kisan Morcha.

“The number of participants was restricted abiding by Covid protocols. Village elders and leaders like Gram Pradhan, Panchayat and Zilla Parishad heads and members, along with some progressive farmers were present among others in the meeting,” added Chahar about the congregation he participated at village Iradat Nagar of Saiyan block in Agra district, Uttar Pradesh.

He said similar programmes were held across the country by BJP Kisan Morcha office bearers on Sunday.

There are opinions in certain quarters that the ongoing peasant agitation may have a political fallout. Leaders protesting the three new farm laws have threatened to take to the streets to seek the defeat of BJP candidates when assembly elections are held next year. Uttar Pradesh, Uttarakhand, and Punjab are among states going to polls early next year.

Groups of protesting farmers, led by prominent union leaders, are expected to travel across Uttar Pradesh and Uttarakhand soon after the monsoons. A similar exercise was undertaken in West Bengal earlier this year, but it was confined to just a couple of constituencies.

Buoyed by the setbacks to BJP in West Bengal assembly elections and later in Uttar Pradesh local body polls, the unions have decided to up the political ante.

Terming the exercise as an effort in spreading awareness and awakening people, he added, the process will begin in Uttar Pradesh and Uttarakhand once the Covid situation stabilises and the monsoon gets over. “Then we will move towards Madhya Pradesh and the rest of the country,” the BKU leader added.

Some 15 state assembly elections are scheduled to be held over the next two years.

However, Chahar, Lok Sabha MP from Fatehpur Sikri in Uttar Pradesh, ruled out apprehensions of any political repercussion. He claimed farmers are with them and have full faith in the leadership of the Prime Minister.

“The Union government led by Prime Minister Narendra Modi has made several provisions for farmers. Not only crop procurement continues under MSP (minimum support price), but the farmers also gain through direct bank transfer of payment. Recently, fertiliser price subsidy was increased manifolds when costs soared in international markets,” he said.

“There are several schemes in farmers’ benefit. Crop insurance, soil card, PM Kisan Samman Nidhi are among several other schemes which have been introduced by the Centre. BJP Kisan Morcha members have reached out across the country to spread awareness,” Chahar added.

The protesting farm unions however claim that the laws would pave the way for the dismantling of ‘mandis’ and the MSP system, leaving them at the mercy of big corporate entities.

Protest over the three farm bills are going on since November 26 last year at Delhi’s borders. Among their charter of their demands are unconditional repeal of the farm laws and the legalisation of MSP.