Home  »  Website  »  National  »  BJP Losing Its Strongholds One By One, Maharashtra Is Latest

BJP Losing Its Strongholds One By One, Maharashtra Is Latest

The BJP is losing grip over some of the key states. The party's strength that helped it ride a massive victory at the Centre in May this year has been put to test. 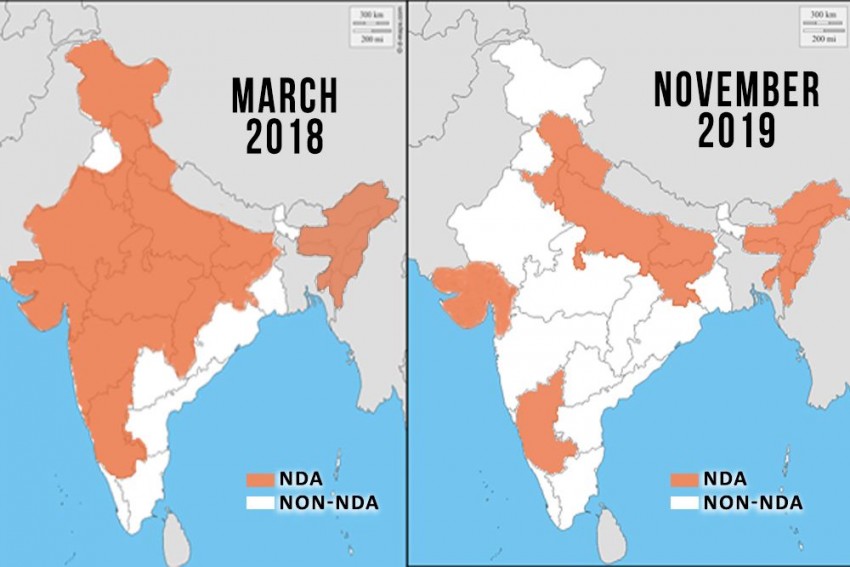 Qadri Inzamam November 27, 2019 00:00 IST BJP Losing Its Strongholds One By One, Maharashtra Is Latest 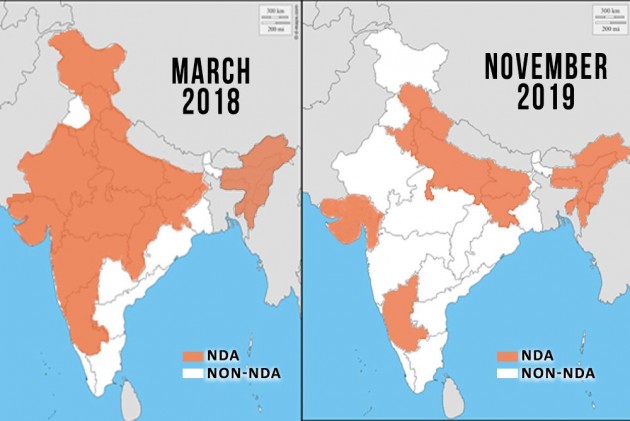 When the Bharatiya Janata Party formed the government in Maharashtra in the wee hours of November 23, with the support of NCP leader Ajit Pawar, the intent was to recover from the setbacks the party has suffered in other states in last three years.

With the fall of BJP’s 4-day-old government in Maharashtra, the bigwigs in the party have a reason to worry about its shrinking footprints in some of the key states.

Also Read: It's A Local Call: Lessons From Maharashtra And Haryana State Elections

The saffron party swooped up states after states after 2014, when it first came to power at the Centre. From commanding just seven states, it won the assembly elections in 21 states by 2018 by riding the Modi wave.

Then came stagnation. And unexpected defeats.

While it managed to form governments in Assam and other states, it faced staggering defeats in its strongholds. In 2018 elections, BJP was defeated in key states like Rajasthan, Madhya Pradesh and Chhattisgarh. In the erstwhile state of Jammu and Kashmir, where BJP had made inroads for the first time in 2014 after forging an alliance with PDP, the party lost its footprints there, after President’s Rule was imposed in 2018.

Also Read: BJP Scrapes Through But Karnataka Politics Still Not Out Of The Woods

Even the Karnataka put the BJP’s strength to test where B.S. Yediyurappa had to resign after four days as Chief Minister in 2018 when he faced a floor test. Then almost a year later, it took the BJP a coup to topple to Congress-JD(S) coalition government and return to power.

Despite winning the 2019 Lok Sabha elections with a bigger margin than previous polls, the BJP could not manifest a similar performance in the state elections in Haryana and Maharashtra.

Also Read | Fadnavis Not Only CM, Here Are Others Whose Stint Didn't Last Even A Week

The BJP’s seat share in Haryana dropped to 40 in recently-held assembly elections. The party had won 47 seats in previous elections in 2014, according to the Election Commission.

Manohar Lal Khattar-led government’s slogan "Abki Baar 75 paar" appeared to be falling well short of the majority mark of 46 in the 90-member House.

BJP formed the government in Haryana but not without the support of JJP leader Dushyant Chautala and some political drama.

In Maharashtra, home to its Hindutva ideologue RSS, BJP’s seat share dropped from 122 in 2014 to 105 in recent elections.

In the power tussle that followed the poll results, BJP tried everything to retain the state. The attempt to form the government in a hush-hush manner also failed to pay off as it fell just four days later.

With BJP losing its command over Maharashtra, the party’s footprints have been significantly shrunk. From 22 states in 2017, the party is left with just 17 states. Madhya Pradesh, Rajasthan, Chhattisgarh and Maharashtra being large states, the loss is tremendous.

A natural question that arises is: Can BJP retain Jharkhand?