Pawar reiterated that he decided not to contest the Lok Sabha polls, as he wanted to make way for other members of his family and because he felt that it was 'time to stop'. 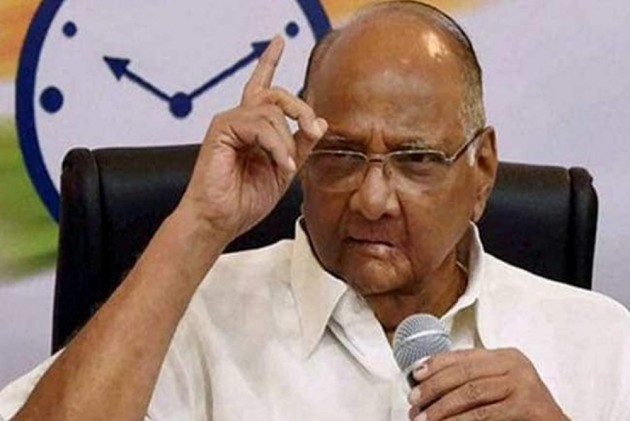 NCP chief Sharad Pawar said Tuesday that the BJP may emerge as the single largest party in the Lok Sabha polls, but Prime Minister Narendra Modi is unlikely to get a second term in office.

Pawar reiterated that he decided not to contest the Lok Sabha polls, as he wanted to make way for other members of his family and because he felt that it was "time to stop".

"The BJP may emerge as the single largest party post parliamentary elections and will have to seek support of allies (to form the government). In that scenario, Prime Minister Narendra Modi is unlikely to get a second term," he told reporters on the sidelines of a function in Mumbai.

'I Will Contest Lok Sabha Polls, Ajit Pawar Will Not': Sharad Pawar

On Monday, Pawar had announced that he would not contest the next month's Lok Sabha polls.

The veteran politician had said that as two members of his family are going to contest the polls "somebody had to step back."

He had said that his nephew and former deputy chief minister Ajit Pawar's son Parth will be the NCP's candidate from Maval Lok Sabha constituency.

"I have withdrawn my candidature from Madha constituency as I wish to make way for other members in the family. Many people asked me to rethink my decision, but I am 79 years old now. There is a time to stop," he said.

"I enjoy people appealing to me. I have personally insisted Vijaysinh Mohite Patil, the sitting MP from Madha LS seat to contest the election again," he added.

However, Pawar had last month said that some of his party colleagues are insisting that he contest the Lok Sabha election from Madha in Solapur district.

Reacting to Pawar's announcement of not contesting the Lok Sabha polls, Fadnavis had said on Monday that the NCP leader "sensed the change in the air", and decided to rethink on plans to contest the Lok Sabha polls from Madha LS seat.

On the chief minister's remarks, Pawar said, "It is childish to call my decision as defeat as I have won elections 14 times, including the Assembly and Lok Sabha elections that I contested so far. On the other hand, late prime minister Atal Bihari Vajpayee and (BJP veteran) L K Advani had tasted defeat."

When asked whether it would impact the Congress and the NCP during the campaign, Pawar said, "Sujay Vikhe Patil is not a state-level figure. Whether to listen to one's son's demand or not is a family's decision. How can I address someone else's child's demand of contesting election? It would not look good."

The former Union minister said he will meet some regional parties across the country on March 14 and 15 in New Delhi, where further strategy of 'mahagathbandhan' (grand alliance) will be discussed.

When asked about some regional parties moving away from the Congress and NCP alliance in Maharashtra, Pawar said, "I appreciate the PWP for extending support to the NCP in the Lok Sabha election. The NCP has also held talks with the Swabhimani Shetkari Sanghatna (SSS) for seat-sharing, but the farmers' front has some expectations from the Congress as well. It will be decided by these two parties."

"The seat sharing formula between NCP and Congress has almost finalised and we will soon make an official announcement," he added.

Modi had earlier described the NCP chief as his political guru. When asked about it, Pawar said, "When it comes to political decisions, Modi does not seek anyone's advice. He shows his 56-inch chest."

Over the IAF air strike in Pakistan and attempts to reap political benefits out of it, he said, "Those who think that they could not win (elections) are now seeking the help of such issues. We do not wish to reap benefits out of it and politicise the issue."

Pawar criticised the Modi government over the note ban saying, "In its report, the RBI has said that it had raised objections related to demonetisation. Still, the government imposed it and many people lost their jobs."

On being asked about several political leaders from the BJP and the Shiv Sena criticising him, Pawar said, "We do not indulge in such things because of our family culture. Let them do whatever they want to say."