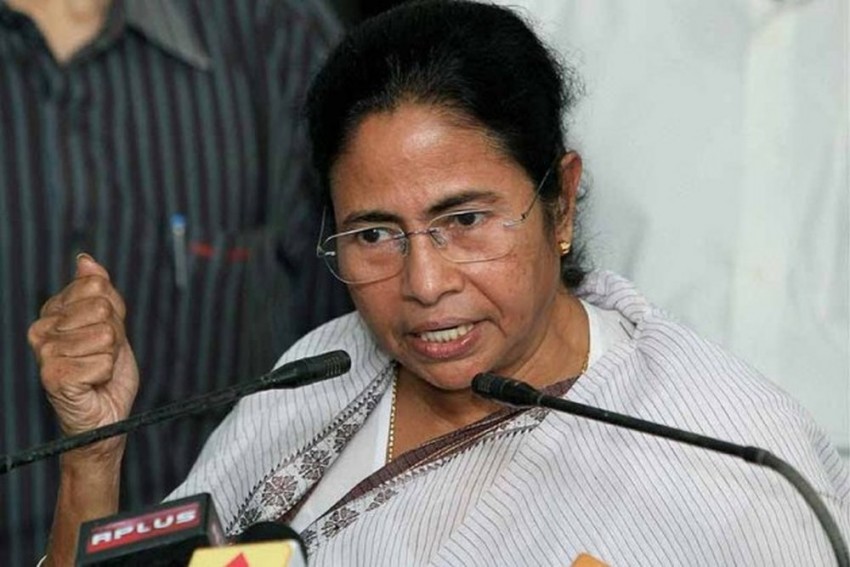 Banerjee and Adhikari are contesting from the seat for the Assembly elections. The constituency will go to polls on April 1 and Tuesday marked the last day of campaigning there.
Lashing out at the BJP, the TMC chief alleged that police personnel from the saffron party rules states were being used to “terrorise” voters in Nandigram. She also claimed that the BJP was distributing cash to lure voters.

Criss-crossing the Assembly segment on wheelchair in the last leg of campaigning, the TMC supremo alleged at Sonachura that huge amount of cash was being brought from all over the country and "distributed from hotels by the (BJP) ministers" to lure people cast their votes in favour of the saffron party nominee.

Banerjee further alleged that cash was also being distributed from vehicles of the security forces to bribe voters and accused BJP of crossing all norms to come to power in the state.

"This is the money of PM Cares Fund, this is unaccounted cash amassed during demonetisation, this is the cash having swelled their coffers after sale of PSUs. This is the public money they had looted and now giving in Rs 500/1000 to each voter. We had informed the Election Commission about this but it still continues unabated," she said.

At the second meeting at Basulichak, she said, "several ministers from BJP-ruled states and Central ministers are behind distribution of cash."

The feisty Bengal leader also asked at Basulichak "why more than 100 cars are in the convoy of Union Home Minister Amit Shah while not more than 5 vehicles are allowed in a convoy during elections?

"Someone is being given more privileges than others," she alleged.

At the meeting at Basulichak, the CM while taking an apparent dig at Suvendu Adhikari said, "CPI(M) harmad (pirate) from whose house shots were fired at protestors in Nandigram in 2007, has now become the right hand man of the betrayer of people."

At the Sonachura meeting, Banerjee alleged, "police forces from Madhya Pradesh and some other BJP-ruled states have been brought to Nandigram to terrorise voters in villages and tilt the verdict in favour of the saffron party.”

Predicting a massive win from the seat and her party returning to power in the state, she warned "they (police forces from outside) will be here only for few days. Make no mistake. We will be back and give the betrayers a befitting reply."

She said the Election Commission is being apprised of the alleged act by police forces from outside of terrorising villagers.

"We have no issue if the outsider police function impartially. But, we have credible information they are not," she alleged.

Banerjee iterated her call to the electorate to wait if the EVM malfunctions during voting and "not leave the place even if you are asked to come back after a while to avert any bid to change your verdict."

Banerjee urged the people to be on alert against "any bid to instigate communal riots in the seat in the run up to the polling and on the day of polling."

"They have plans to kill their own people and pass the blame on us to engineer riots. We have information. Be on guard," she said without naming the BJP.

"Nandigram stands for united battle against forcible land acquisition participated by different communities. Be on guard against any bid to fuel tension by keeping any object in places of worship. We are all united. Defeat riot mongering BJP," she said.

Banerjee promised a model Nandigram connecting the place with the industrial hub Haldia to expedite economic development in the area.

Trying hard to explain that she never meant people from Nandigram were involved in alleged attack on her on March 10, Banerjee said "outsider goondas were brought in to attack me."

Banerjee on Monday accused Adhikari of plotting attack on her drawing a sharp retort from her former ministerial colleague who accused the cm of wearing crape bandage in public to gain sympathy of voters and wanted her x ray report be made public.