Roy, who was elected from Kaliaganj on a BJP ticket in the April-May assembly poll in the presence of party secretary general Partha Chatterjee said he was not comfortable in the saffron camp. 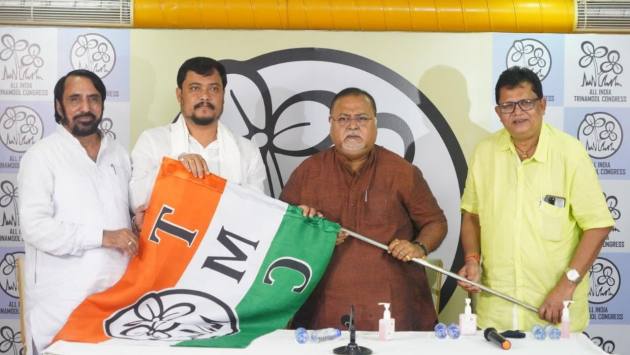 After experiencing the saffron camp for two years, BJP MLA Soumen Roy on Saturday made his comeback to the ruling TMC and apologised for for his decision of leaving the state party earlier.

Roy is the fourth BJP MLA who have quit the party and joined TMC since the 2021 West Bengal  assembly poll.

With his resignation the strength of the 294 member House BJP has shrinked to 71.

Roy, who was elected from Kaliaganj on a BJP ticket in the April-May assembly poll in the presence of party secretary general Partha Chatterjee said he was not comfortable in the saffron camp and wanted to take part in the development initiatives by Chief Minister Mamata Banerjee.

"Though I had quit TMC my mind and soul had remained with TMC. I do not subscribe to its ideology," he said.

Chatterjee said "BJP MLA Soumen Roy is returning to our fold as he wants to be part of the development of Bengal specially north Bengal,"

To a question Roy said he was sorry about leaving TMC with which he had been associated for years.

BJP national vice-president Mukul Roy had returned to TMC with son Subhransu in May days after being elected on the saffron party ticket from Krishnanagar South seat.

He was followed by three more TMC turncoats, who had contested the election on BJP ticket, won and returned to their old party.

Reacting to Roy's switching over, state leader of opposition and BJP leader Suvendu Adhikari told reporters "Whoever leaves the party it is his decision. But the party will seek their disqualification after asking them to explain their stand."