At the BJP's first national executive meet since the pandemic, Prime Minister Modi said the party workers should become a bridge of faith for the common man. 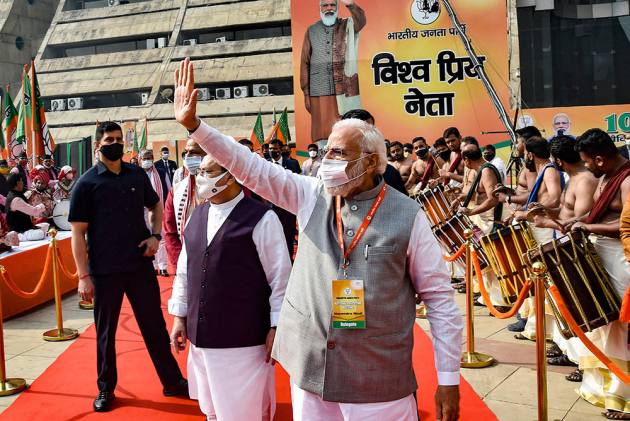 Placing his report on the poll-bound state before the party’s national executive, Punjab BJP president Ashwani Sharma said on Sunday that the party would contest all seats in the coming state assembly elections. This is being seen as a sign that the central leadership has also made up its mind for this, meaning that no alliance with any of the political players in the state may be on the cards as of now.

This happened as part of presentations made to the national executive by BJP state presidents and party Chief Ministers of the five states – Uttar Pradesh, Uttarakhand, Manipur, Goa and Punjab -- that are soon going to polls.

Union minister Bhupendra Yadav told the media that party presidents of the five poll-bound states discussed their strategy and CMs put forward the “achievements” of their governments.

Prime Minister Narendra Modi expressed satisfaction over the reports presented by the party units and governments in the poll-bound states, saying these were an indication that the party was moving forward in the right direction.

In his concluding address, Modi said that the BJP was not a party that associated its loyalty with a family but one of workers who were known to be connected with common people. “BJP workers should become a bridge of faith for the common man,” Modi told the national executive. “The connect of our workers with common people has made us succeed.”
He also suggested that the history of sewa (service) that the party is proud of since the inception of the Bharatiya Jana Sangh in the 1950s be brought on Namo app so that workers could understand it and feel inspired.

This happened hours after BJP president Jagat Prakash Nadda kicked off the party’s first national executive meet since the pandemic on Sunday morning, congratulating the Modi government over ‘its steps to combat coronavirus’; seeing the Taliban takeover of Afghanistan as vindication of the CAA and listing out the ‘achievements’ of the government on reaching out to farmers and the Sikh community.

“The population of entire Europe is 75-crores. However, to ensure that the pandemic did not bring in starvation, Prime Minister Narendra Modi took the initiative to supply five-kg grain to 80-crore citizens from May 2020 to November 2021,” Union education minister Dharmendra Pradhan reported Nadda as saying in the closed-door introductory session. “Due this, the economy has begun to come back on track. Businesses have grown, as high GST collections show. Schools and colleges have begun to open. This is because of this initiative. The national executive thanked him for that.”

Saying that the coronavirus situation was unprecedented and that demand for oxygen in one particular week climbed to 9000 metric tonnes, Nadda told the delegates that every effort through rail, road and air was made to rush oxygen, medicine and PPE kits to people. He also commended the government for over 100-crore doses of the vaccine having been administered.

The BJP’s first national executive meet after the pandemic held in blended mode – with 125 delegates attending at the NDMC Convention Centre in the national capital and state delegates, including Chief Ministers, attending online – kicked off at 10 am.

The total number of members in the party’s national executive is about 346, of which 342 attended virtually or in person, with the party introducing a system of digital signatures.
While Uttar Pradesh CM Yogi Adityanath was supposed to attend the meet virtually, he chose to arrive at the venue to attend the meet, being held months before the UP elections.
Prime Minister Narendra Modi and Home Minister Amit Shah attended the meet.
LK Advani and Murli Manohar Joshi attended virtually, Pradhan said.

Nadda also told the meet that while some had criticized the Citizenship (Amendment) Act, the Taliban takeover in Afghanistan has come as evidence that the law was required to protect minorities in states nearby. He congratulated the PM and Home Minister Shah for the abrogation of Article 370, which once gave Jammu and Kashmir special status, saying that the responsibility to revoke the temporary measure lay with all governments. He said the result is “progress”: “Tourism and investment there have gone up.”

Nadda also addressed the issue of farmers – farmers from Punjab, Haryana and west UP have been protesting against the Centre’s farm laws for about a year – and the Sikh community, at a time when elections in Punjab are approaching.

“Many are saying many things. As per facts, in 2014, there was only 23,000-crore farm expenditure allocated in the budget. In the last budget, expenditure amount has gone up to Rs. 1,23,000-crore,” Pradhan quoted Nadda as saying. “The MSP for paddy, rice, etc., has gone up.”

“Many programmes have been launched for Dalits, backwards and Adivasis,” Pradhan said, pointing out that Nadda made specific mention of some initiatives for the Sikh minority community.

“For Sikhs, there have been four key initiatives that Nadda ji mentioned. Sikh gurudwaras and social organisations did not have FCRA grant facility earlier. It was simplified by the Modi government. Langar (community meals) was under GST earlier; now it is free from GST.

Spending Rs. 120-crore, Kartarpur Corridor was put in place. The setting up of an SIT on the 1984 riots and expediting the process of providing justice was also done,” Pradhan said.
Nadda told the delegates that while the party’s spread in Kerala, Tamil Nadu, Andhra Pradesh, Odisha and Telangana are challenges – though, he added, the party was now picking up in Telangana – Assam and Tripura have been resounding successes.

He said that while the party did grow fast in Bengal, it “lost 53 activists” in the process and would strive to “democratically rid Bengal of chaotic elements”.

Nadda also set out the path of the party’s organizational expansion: 10, 40, 000 booth committees by December 25, 2021, a like number of page committees – corresponding to each page in election registers – by April 6, 2022, the party’s foundation day, and the provision of an institutional mechanism to play Modi’s Mann Ki Baat at each booth-level committee.