The decision of the BJP top-brass to facilitate Uddhav Thackeray’s entry is certainly not devoid of its political implications in the long run. 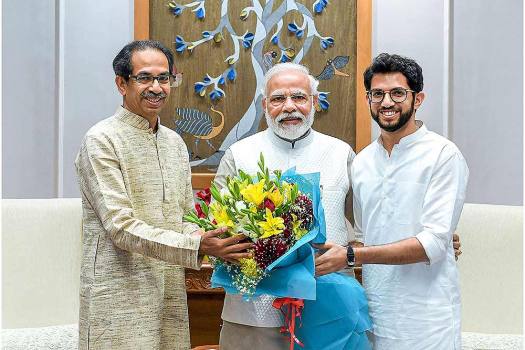 Clearing the decks for Maharashtra Chief Minister Uddhav Thackeray to get elected to the state legislative council, the Bharatiya Janata Party may well have reopened the road to rapprochement with its erstwhile ally, Shiv Sena.

The Election Commission on Friday announced the date for the election to nine seats of the Mahastratra Vidhan Parishad, making Sena leaders heave a big sigh of relief after days of confusion. The election will be held on May 21, barely a week before Uddhav is required to meet the statutory requirement of becoming a member of the either house of the state legislature.

Uddhav, who is heading the coalition Maharashtra Vikas Aghadi (MVA) government, had taken oath on November 28 last year, has to get elected either as an MLA or an MLC within six months from the date he was sworn in, as per the constitutional provisions failing which he will cease to be the chief minister. Since all elections across the country had earlier been put on hold by the Election Commission of India owing to the outbreak of the Coronavirus pandemic, clouds of uncertainty had lately been hovering over the fate of the Uddhav government.

The state cabinet, in fact, had passed a resolution earlier this month, recommending to the Governor to nominate Uddhav to the legislative council against one of its vacant seats. Governor Bhagat Singh Koshyari, however, showed no hurry to take any decision on his own for nearly 20 days and sought the legal advice in the regard. It infuriated the Sena leaders who accused Raj Bhavan of acting at the behest of BJP in a bid to create political instability at a time when the state was fighting a grim battle against the COVID-19 scourge.

As the controversy over the gubernatorial delay snowballed by the day, Uddhav decided to call up Prime minister Narendra Modi on Wednesday to express concerns over the development and reportedly sought his intervention. The prime minister, it is learnt, promised him to look into in the matter. Much to Uddhav’s relief, the ECI announced the date for the Maharashtra council polls two days after his talks with the prime minister. On Thursday, the Governor had also written to the ECI requesting it to hold the polls, resulting in the announcement of election date. On Friday, Udhhav called on Koshyari on what was referred to as a ‘courtesy visit’.

The ECI’s decision in response to the Governor’s letter, which has ended a simmering political controversy in the state, is being seen in the political circles as a bid by the BJP to offer an olive branch to its former ally. The BJP and Sena had parted ways after the Maharashtra assembly elections last year, ending their three-decade-old alliance over a dispute over sharing of chief ministership. Both the party had gone into October 21 elections as pre-poll allies and won a comfortable majority. But the Sena later demanded chief ministership for half of the government’s five-year term, which was summarily rejected by the BJP.

Subsequently, the Sena joined hands with the NCP and the Congress to form the government, leaving BJP, the single largest party, sulking. Since then, the relationship between both the parties worsened and appeared to have reached a flashpoint over the standoff between Raj Bhavan and the Uddhav government.

The decision of the BJP top-brass to facilitate Uddhav’s entry is certainly not devoid of its political implications in the long run. Among other things, it is being interpreted as BJP’s big gesture to patch up with the Sena, with which it has shared power for many years in the past. It apparently knows that the Sena may have aligned with the NCP and the Congress in its pursuit of power, but it has been closer to the saffron ideology over the years. The party, therefore, has reasons to think that sooner or later, internal contradictions will lead to the downfall of the MVA coalition. Political observers believe that the BJP’s has nothing to lose in leaving its door ajar to keep the options open for both parties to build bridges between them in the politically crucial state. In any case, as they say, there is no permanent friend or foe in politics.