J P Nadda is scheduled to kick off the state-wide rath yatra, named as 'Parivartan Yatra', from Nabadwip in Bengal's Nadia district today 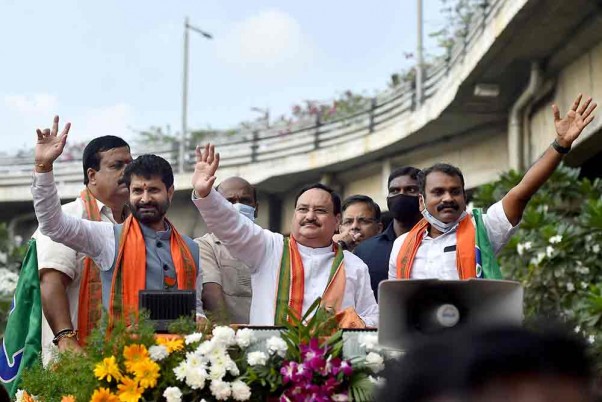 BJP national president J P Nadda will launch the party's state-wide rath yatra in West Bengal today. The yatra is being launched to mobilise public support ahead of the state Assembly elections due in April-May. Nadda arrived in Kolkata on Friday night.

J P Nadda is scheduled to kick off the 'Parivartan Yatra' on Saturday from Nabadwip in Nadia district, the birthplace of 15th century saint Chaitanya Mahaprabhu, according to sources in the saffron camp.

Nadda will first visit Malda in the morning to take part in a road show and two other programmes in the district, the source said.

In the afternoon, he will launch the rath tatra, also named as 'Parivartan Yatra' from Nabadwip.

Several senior BJP leaders are scheduled to arrive in West Bengal during the month-long campaign, set to start from Nadia on Saturday.

The party intends to launch similar yatras from Coochbehar, Kakdwip in South 24 Parganas, Jhargram and Tarapith in Birbhum between February 6 and 11.

The state government has asked the BJP to seek permission from local district administrations before embarking on the yatra.