Yesterday's win has pushed the BJP's tally in the 182-member Assembly to 111, while the number of MLAs of Congress slid further to 65. 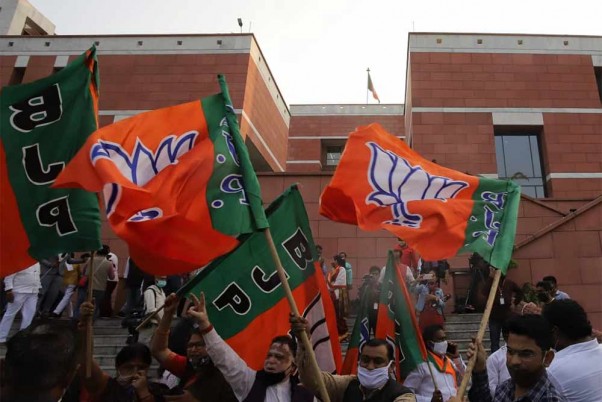 The victory of the ruling BJP in the eight seats in the Gujarat Assembly for which bypolls were held recently came at the expense of the Congress, which has seen a steady erosion in its base since notching up 77 seats in the Assembly elections held in December, 2017.

The Tuesday's win has pushed the BJP's tally in the 182-member Assembly to 111, while the number of MLAs of Congress slid further to 65.

The BJP kept denting the Congress since then.

In a byelection held in December 2018, Congress heavyweight Kunvarji Bavaliya won on a BJP ticket, reducing the Grand Old Party's tally in the House to 76, while the number of MLAs of the saffron party increased to 100.

In May, 2019, the BJP won all four seats that had fallen vacant due to resignation by sitting legislators of the Congress.

Later, two more MLAs of the Congress also quit the party and joined the BJP, necessitating by-elections in October 2019 in these six constituencies.

The BJP and the Congress each won three seats in bypolls, taking their tallies in the Assembly to 103 and 73, respectively.

Byelections on these eight seats were held on November 3.

In the 182-member House, two seats currently remain vacant due to disqualification of the sitting MLAs which was challenged in court.

Amongh other parties, the Bharatiya Tribal Party (BTP) of tribal leader Chhotu Vasava has two MLAs, the NCP has one and Independent one.