According to latest trends, the BJP had either won or was leading in 105 seats against 122 in 2014, while the Sena was ahead in 56 constituencies, 7 short of its tally in the previous elections. 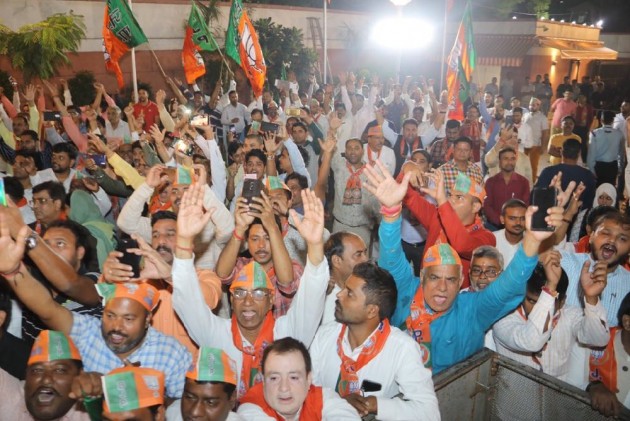 The Bharatiya Janata Party (BJP) on Thursday emerged as the single-largest party in both Maharashtra and Haryana, but Congress, too, put up a convincing show, despite infighting and a lacklustre campaign.

In Maharashtra, the BJP-Shiv Sena alliance secured the majority, leading in over 161 seats, followed by the NCP-Congress combine, which was ahead in 98 seats. The BJP-Sena coalition, despite fighting these polls jointly unlike the 2014 elections, got lesser seats this time around.

According to latest trends, the BJP had either won or was leading in 105 seats against 122 in 2014, while the Sena was ahead in 56 constituencies, 7 short of its tally in the previous elections.

The star of the show, however, was the 78-year-old NCP chief Sharad Pawar, who fought all odds to take his party to 54 seats in the state. Largely written off just before the polls, the NCP was battered by defections. Its position in the election was further compromised when its ally Congress witnessed infighting of unparalleled proportions in its Mumbai unit.

Speaking at a press conference, Pawar said: "One important thing to see is that people who left us, have not been accepted. Defections have not worked in favour of those who left."

"People did not like their act of expediency ahead of the election," he added.

In his first reaction to election results, Shiv Sena chief Uddhav Thackeray said he wasn't desperate for power, adding the two saffron parties will soon work out a formula to lead the state.

It was, however, his answer to the question of the next chief minister that caught everyone's attention. When asked, Thackeray said, "It's an important question", without elaborating any further.

The BJP will end up winning fewer seats in 2019 compared to the 2014 Assembly polls, but its "strike rate" is better this time, and the ruling alliance will retain power in Maharashtra, said Chief Minister Devendra Fadnavis.

The BJP leader also thanked the people of Maharashtra for giving a "clear and decisive mandate" to the BJP-led NDA.

Fadnavis said the BJP and its ally Shiv Sena will go by what was "pre-decided" between them on sharing of power.

The grand old party, rather unexpectedly, witnessed a revival of sorts in Haryana where for the significant part of the day, it was neck-and-neck with chief minister Manohar Lal Khattar's BJP.

The saffron party emerged triumphant but fell five short of the half-way mark. The Congress, which was predicted to lose big by all but one exit poll results, ended the day winning 31 seats.

Jannayak Janta Party, the 10-month-old offshoot of the INLD, could well emerge as the kingmaker in the state. The party, under the leadership of 31-year-old Dushyant Chautala, won 10 seats, followed by seven independents who secured their constituencies.

Both Congress and BJP are said to have made overtures to Chautala considering none of the principal parties has a clear majority as yet.