Victory has given a boost to Chief Minister B.S. Yediyurappa's stock 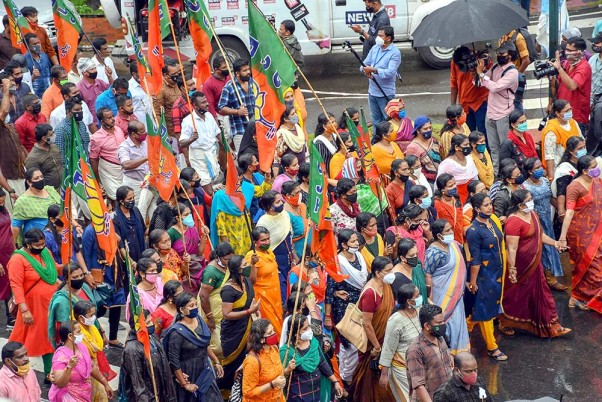 The ruling BJP on Tuesday swept the bypolls to two Assembly seats in Karnataka by wresting them from the Opposition Congress and JD(S).

The outcome has given a boost to Chief Minister B.S. Yediyurappa's stock amid talks about his replacement in some quarters.

It is seen as a setback for Opposition leaders, especially Karnataka Congress chief D.K. Shivakumar as it was the first election in the state under his stewardship.

With these victories, the strength of BJP will rise to 118 in the 225-member Assembly that would still have two vacancies caused by, including by the recent death of a member.

The Congress has 67 members, JDS 33, BSP one, nominated one, and two Independents besides the Speaker.

In the Rajarajeshwari Nagar Assembly segment, N. Munirathna scored a hattrick, winning by an impressive margin of more than 58,000 votes.

In Sira, it was history of sorts for the BJP as it recorded its first-ever victory there with its candidate Dr C.M. Rajesh Gowda securing the seat by a margin of over 13,400 votes.

The bypoll has been necessitated in Sira in Tumakuru district following the death of JD(S) MLA B. Sathyanarayana in August, while the RR Nagar seat fell vacant due to the disqualification of Munirathna as the then Congress MLA last year under the anti-defection law.

Though it was known that the results of the polls will have no bearing on the stability of the BJP government, the outcome was perceived in many quarters as a reflection on the performance of the BS Yediyurappa government, especially during the Covid-19 pandemic.

"This is the victory of the people and by ensuring BJP's victory they have exuded confidence and support towards the state government and its handling of flood situation and corona pandemic," Yediyurappa said, thanking voters for the party's success in both the constituencies.

He also promised to fulfill the promises made to the people during the campaign and said that with the blessings of Prime Minister Narendra Modi he will work towards completion of all the developmental works, in the remaining two-and-half years' tenure.

Yediyurappa also said he will contact the Prime Minister, Union home minister Amit Shah, and BJP national president J.P. Nadda over the phone soon, also try to meet them regarding the much-awaited cabinet expansion or reshuffle and wants to complete the process in the next couple of days.

JD(S) that had won the seat in the 2018 Assembly polls has been relegated to third place with the party candidate Ammajamma B (wife of late party MLA Sathyanarayana) securing 36,783 votes.

This is the third victory in a row for Munirathna and his first as the BJP candidate.

Munirathna, after his disqualification last year, had joined the BJP.

The ruling party -- despite stiff resistance from a section within -- gave him a ticket after he was cleared by the courts from the charges of alleged election malpractices. Yediyurappa had during the campaign indicated about making Munirathna a minister if he wins.

Defeat in the bypolls has put Shivakumar and JDS leader H.D. Kumaraswamy on the back foot as it has in a way dampened their ambition to assert command over the Vokkaliga vote bank in the old Mysuru region.

Vokkaligas have a considerable presence in both the seats.

More specifically the defeat in RR Nagar is seen as a huge setback to Shivakumar and his brother and Bengaluru Rural MP D.K. Suresh, as Congress candidate Kusuma was their pick and they had heavily invested in the campaign with the Assembly segment coming under Suresh's parliament constituency.

Speaking to reporters, Shivakumar accepted responsibility for the party's defeat in the bypolls and asked the cadre not to be disheartened.

Noting that he did not expect such a huge margin in RR Nagar, he also expressed surprise over the BJP polling new votes in Sira.

Leader of the Opposition in the state Assembly, Siddaramaiah, while conceding defeat, alleged: "This is the defeat of democracy, as this is a victory for illicitly earned money and misuse of administrative machinery."

Kumaraswamy said bypoll results were not the yardstick for a political party and he would concentrate on strengthening the JDS.

Winning both Sira and RR Nagar has come as a morale booster to the BJP, more specifically to the 77-year-old Yediyurappa amid intense speculation in some quarters that BJP high command is mulling leadership change considering his age.

Bagging Sira is a major gain for BJP.

With its negligible presence in the constituency where Congress and JD(S) are traditional rivals, the party had not polled more than 24,000 votes there in the past.

After winning KR Pet and Chikkaballapura Assembly seats during December 2019 bypolls, the BJP has been working at making further inroads in the old Mysuru region, where the party has been traditionally weak.

With the win in Sira, the J.P. Nadda-led party has increased its tally in the region.

Yediyurappa's son and state BJP vice-president B.Y. Vijayendra is being credited in part for the party's victory in Sira.

After the KR Pet win, Sira is another feather in Vijayendra's cap, with him being seen as Yediyurappa's political heir apparent.