Samajwadi Party chief Akhilesh Yadav on Sunday alleged that the ruling BJP is targeting the minority Jain community and does not want it to prosper. 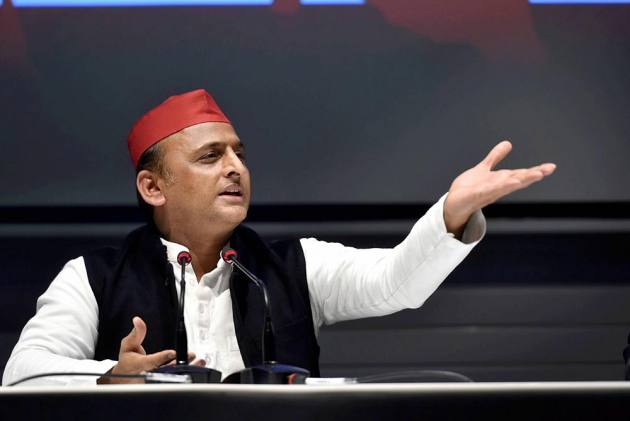 The former Uttar Pradesh chief minister said this referring to central agencies' raids on the premises of two perfume traders in the state recently.

Embarking on 10th leg of the Samajwadi Vijay Yatra here after paying obeisance to Lord Parshuram at a temple, Yadav said, "The BJP is not only the enemy of development but also of minorities."

He claimed that the money recovered during a raid in Kanpur (on premises of Piyush Jain) was that of the BJP.

The money kept "inside the walls" and counted belonged to the BJP, he alleged.

Yadav claimed that the BJP in order to avoid getting itself defamed and justify its wrong decisions is pointing a finger at the SP, in an apparent reference to party MLC and perfume trader Pushpraj Jain.

The Finance Ministry had said Rs 177 crore was recovered from Piyush Jain's premises in Kanpur and it was the "biggest ever seizure of cash" by an enforcement agency.

BJP leaders have sought to link Piyush Jain with the SP, claiming he had launched the "Samajwadi Attar" (perfume)' with Yadav's support recently.

Samajwadi Party president Akhilesh Yadav on Tuesday categorically denied any links between his party and Piyush Jain, and mockingly said the BJP got "its own businessman" raided "by mistake".

He said the "Samajwadi Attar" was launched by SP MLC Pushpraj Jain.

The SP chief also listed the welfare and development works done by his government and accused the BJP of stalling them.

"Every section of society wants a change because in the four-and-half years of the BJP rule, people have got sadness and harassment," Yadav said.

He said a stadium after former PM Atal Bihari Vajpayee was built by his party's government here.

Earlier in the day, Yadav began the 10th leg of his party’s yatra from the Gosainganj area after offering prayers at a temple of Lord Parshuram.

In a statement, the party said Yadav along with former SP MLA from Lambhua (Sultanpur) Santosh Pandey offered floral tributes to the 68-foot-high statue of Lord Parshuram.

The move is being seen as an attempt to woo Brahmin voters ahead of the Assembly polls in the state.

Former Speaker of UP Legislative Assembly Mata Prasad Pandey, former minister Manoj Pandey and other prominent Barhmin leaders were present on this occasion.

On December 12, the Samajwadi Party got a shot in the arm when two sitting MLAs--Vinay Shankar Tiwari (BSP) and Digvijay Narayan of the BJP from Khalilabad constituency in Sant Kabir Nagar-- joined the party.