BJP To Use Uttarakhand CM's Resignation To Stall Mamata's Election

Sources in the BJP claim that it was not Tirath Singh Rawat who wrote his resignation letter but that a draft of the letter was handed over to him when he went to meet party president J.P. Nadda on July 2. 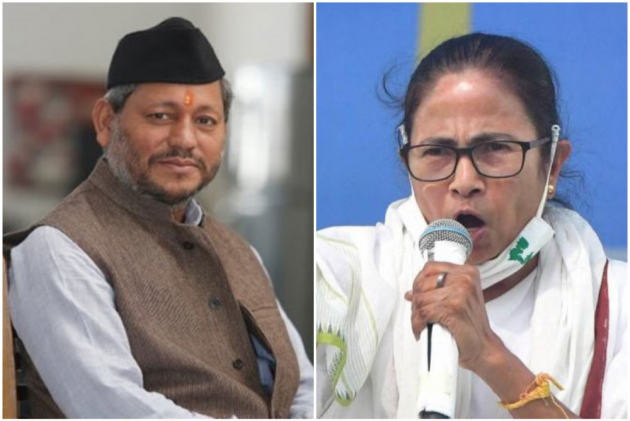 The impact of Tirath Singh Rawat’s resignation as chief minister of Uttarakhand goes much beyond the small hill state for the Bharatiya Janata Party (BJP). While it is a fact that there were murmurs of dissent against Rawat and the BJP could not allow the situation to fester in the poll-bound state, the central leadership plans to use his resignation to create trouble for Mamata Banerjee in West Bengal.

Banerjee, who lost Assembly elections from Nandigram with a narrow margin of 1956 votes, needs to be elected within six months of taking over as chief minister of West Bengal. She is likely to contest from her home constituency of Bhabanipur, which the elected MLA from TMC Sobhandeb Chattopadhyay has already vacated. The Election Commission (EC) can cite the continuing Covid-19 pandemic – one of the reasons cited by Rawat -- to stall by-elections in West Bengal.

Rawat in his resignation letter emphasised on the situation arising out of Covid-19 pandemic, referring to the EC’s decision to defer polls in three Lok Sabha and eight Assembly constituencies in May. Mentioning the constitutional issue -- that he needed to be mandatorily elected to the assembly within six months – Rawat said that the EC was under no constitutional obligation to hold the elections in the state. Article 151A of the Representation of People’s Act (PRA), 1951, states that by-elections may not be held if the remainder of the Assembly's term is less than a year.

Sources in the BJP claim that it was not Tirath who wrote the resignation letter. “The draft of the letter was handed over to him when he went to meet party president J.P. Nadda on July 2. The strategy was to use it to stall Mamata Banerjee’s by-election,” says a senior party leader.

Incidentally, the EC announced the postponement of most of the scheduled by-elections in May, soon after the West Bengal Assembly results were declared. However, sources in the EC tell Outlook that it may not be easy to justify stalling of by-polls in West Bengal. By-elections to seven Assembly seats including Bhabanipur are due in West Bengal.

“The Assembly has just been constituted in West Bengal. So there is still some time. And by-elections in poll-bound states like Uttar Pradesh and Uttarakhand can be suspended because of Article 151A. But that cannot be used in West Bengal. Also, where Covid is concerned, elections on a limited scale can be held with proper precautions. Zila Parishad elections have also been held in UP. So it will be difficult to use it in West Bengal without making it look like a vengeful decision against Mamata Banerjee,” says a senior EC official.

Banerjee has been demanding that the EC allow by-polls and announce dates soon. She has even suggested that campaigning time be reduced to a minimum of seven days. EC official says that a call will be taken after assessing the Covid situation on the ground.