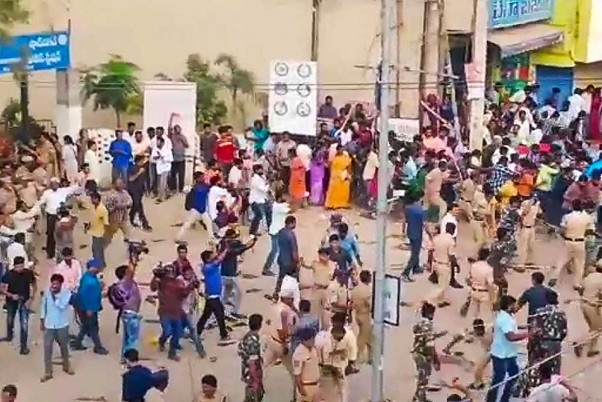 A few people were injured and some houses were ransacked in a clash between TMC and BJP supporters in West Bengal's Paschim Barddhaman district on Saturday, police said.

Both sides hurled bombs at each other and a police contingent has been sent to the spot to bring the situation under control, a police officer said.

The clash broke out when a BJP rally under its state-wide 'aar noi anyay' (no more injustice) campaign reached Barabani More.

The BJP alleged that TMC supporters beat up saffron party cadre, while the ruling party in the state dismissed the charge and termed it an incident of "infighting" within the BJP.

Union minister and Asansol MP Babul Supriyo alleged that local TMC leaders were behind the incident.

"Local TMC leaders are behind the attack. Those involved with the coal mining mafia were also involved in the incident. This is the reality of West Bengal," he said.

The BJP claimed that seven of its supporters were injured in the clash.

"The rule of law has ceased to exist in West Bengal. Only if the BJP comes to power, law and order will be restored in the state," he said.

Dismissing the BJP's allegations, TMC spokesperson Kunal Ghosh said, "The clash was a result of infighting within the BJP. The TMC is not involved in the incident. The saffron party is trying to create an issue to malign us."

Asansol Mayor and district TMC chief Jitendra Tiwari also denied the allegations and termed them as "baseless" and "politically motivated" to malign the party.