While Karnataka CM Basavaraj Bommai has said that a dam will be built at Mekedatu come what may, TN BJP chief K Annamalai has said that his unit will not allow a single brick to be placed there 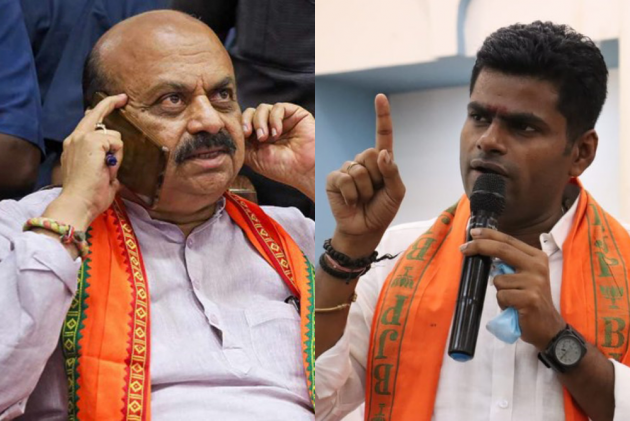 A war of words has been unleashed between Tamil Nadu and Karnataka BJP over the latter’s insistence on building a dam at Mekedatu on the Cauvery.

Both the newly appointed Karnataka Chief Minister Basvaraj Bommai and the BJP’s new Tamil Nadu Chief K. Annamalai have girdled up on behalf of their respective states. After Bommai reiterated his predecessor Yeddyiurappa’s assertion that the dam would be built under any circumstance, Annamalai announced a protest fast by the TN BJP at Thanjavur on August 5. He also stated that the Tamil Nadu BJP would not allow even one brick to be placed at the Mekedatu site. He pointed out that neither the Centre nor the water resources ministry had issued any directions allowing Karnataka to build the dam as claimed by it.

Karnataka CM Bommai brushed aside the TN protest with the words: “Let them protest, but we will build. I don’t care what Annamalai says.” Hoping to exploit this internal fight in the BJP, DMK MP Dayanidhi Maran sarcastically suggested that the best way to solve the tangle would be to let Annamalai lead a delegation from Tamil Nadu to Karnataka.

Not the one to let go off a fight, Annamalal immediately seized the chance and asked Dayanidhi to arrange a private aircraft so he could lead a delegation of farmers from Tamil Nadu to Bangalore to meet Karnataka leaders. “I am prepared to lead a TN delegation but will Dayanidhi’s uncle Chief Minister Stalin permit this?” Annamalai retorted. He also took a potshot at the DMK MP for watching IPL matches during the Covid second wave and finally waking up to the Cauvery issue.

Tamil Nadu BJP spokesperson Thirupathy Narayanan backed his state president by pointing out that the Centre has already assured a TN delegation led by state Irrigation Minister Durai Murugan that Karnataka will not be allowed to build any dam on Cauvery without the permission of lower riparian states like Tamil Nadu. “Karnataka is unnecessarily raising the temperature and our state president has consistently stated that Tamil Nadu’s interests would be protected at all costs,” he pointed out.

Annamalai’s aggressive riposte is something new for the BJP in Tamil Nadu, which has always been on the defensive whenever the Cauvery dispute has reared its head in the past. Being a national party with a higher stake in Karnataka, the BJP has been accused of downplaying its hand on the issue in Tamil Nadu. A similar accusation has also been flung at the Congress in the past whenever its government has ruled in that state.

But having got a toehold in the state Assembly in the recent Assembly elections, the TN BJP wants to play a more active role on the Cauvery issue even if it causes embarrassment to its government in Karnataka. This explains Annamalai’s loud protestations on the issue in an attempt to emerge as a frontline defender of Tamil Nadu’s rights which has been the prerogative of the two regional parties.

However, P. Maniarasan, convener of the Cauvery Rights Protection Committee, has dismissed Annamalai’s posturing as an eyewash. “The Centre has already created the right conditions for Karnataka to get the necessary clearances for the project. If Annamalai is serious about his opposition he should get the Centre to reject the Detailed Project Report submitted by Karnataka,” he said.