Shah also reached out to the West Bengal government employees and said the 7th Pay Commission will be implemented in the state if the saffron party is voted to power. 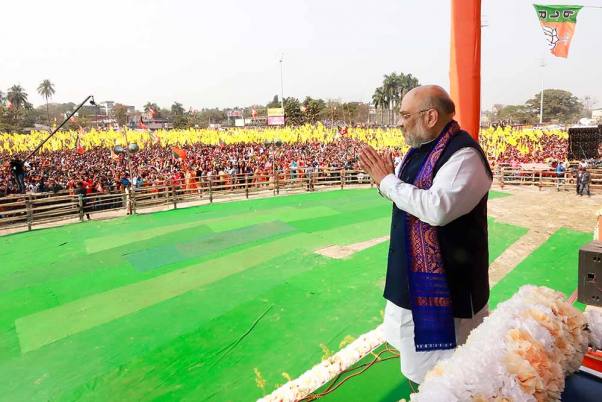 Union Home Minister Amit Shah on Thursday allegedly accused the TMC government of introducing the "cut-money" culture in West Bengal. He asserted that BJP's fight is to end it and take the state to the path of development, if voted to power in the upcoming assembly polls.

While addressing a rally in Gangasagar, Amit Shah said BJP's 'Parivartan Yatra' is not for changing a chief minister, an MLA or a minister but ending infiltration and transforming West Bengal into a developed state.

"This 'Parivartan Yatra' is not for changing a CM, or a minister. It is for ending infiltration and also for the transformation of Bengal. You vote for the BJP. Leave alone illegal immigrants, not even a bird from across the border will be allowed to enter the state," said Amit Shah

He also spoke about the killings of BJP workers and warned that the perpetrators will be thrown behind bars.

The union minister said the BJP is ready to take on the "goons" and the "syndicates" of the ruling TMC.

Speaking on the controversy over the 'Jai Shri Ram' slogan, Shah said, "Bengal CM gets angry at the slogan due to her appeasement politics."

Banerjee had on January 23 declined to speak at an event to celebrate Netaji Subhas Chandra Bose's birth anniversary where "Jai Shri Ram" slogans were raised in the presence of Prime Minister Narendra Modi.

"The central government had sent relief funds after 'Amphan' cyclone, the money was siphoned off by the TMC leaders. If voted to power, we will probe into this corruption. We will form a task force for saving lives from cyclones and environmental disasters," he said.

Shah also reached out to the West Bengal government employees and said the 7th Pay Commission will be implemented in the state if the saffron party is voted to power.

"The financial condition of Bengal is so bad that the state government employees don't get the benefits of the 7th Pay Commission. If voted to power we would implement it in the state," he said.

Speaking on the Gangasagar Mela, Union Home Minister Amit Shah on Thursday asserted, he has full faith that the BJP goverment will emerge victorious in the upcoming assembly polls in West Bengal. He also claimed that after winning the polls, Gangasagar Mela will be made part of the international tourist circuit.

The 'Namami Gange' programme for cleaning River Ganga will also be ensured in the state, the Union minister said.

Shah said, he feels sad about the facilities here since lakhs of pilgrims visit the site annually, and when the BJP comes to power in Bengal, all tourism projects of the Central government will be successfully implemented here.

"We will ensure that the Uttarayan Mela (Gangasagar Mela) becomes part of the international tourist circuit...this place becomes a big tourist spot, and its fame spreads across the world," he said after offering obeisance at the Kapil Muni temple here.

The Kapil Muni temple at the confluence of River Ganga and the Bay of Bengal is a mark of spirituality and conservation of environment, Shah said.

The 'Namami Gange' programme launched by Prime Minister Narendra Modi in 2014 has been working for conservation and cleaning of River Ganga from Gangotri to Sagar, but it "gets stuck" on reaching West Bengal, the minister said.

"I have full faith that a BJP government will be formed in the state and then the purification of River Ganga through the Namami Gange project will be taken up till Gangasagar," he said.

'Namami Gange Programme' is an integrated conservation mission, approved as 'flagship programme' by the Union government in June 2014, to accomplish the twin objectives of effective abatement of pollution, conservation and rejuvenation of the Ganga.