Asserting that there is a 'wave of change' across India, Congress leader Sachin Pilot said the BJP's 'desperate' bid to 'polarise' voters by raising emotive issues will not pay any dividend in the Lok Sabha elections 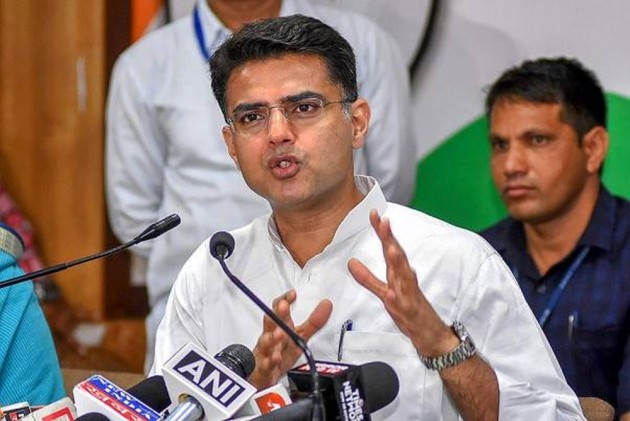 Asserting that there is a "wave of change" across India, Rajasthan's Deputy Chief Minister and Congress leader Sachin Pilot says the BJP's "desperate" bid to "polarise" voters by raising emotive issues will not pay any dividend and the country will have a UPA government on May 23.

Pilot, who has led the Congress campaign in Rajasthan as the party's state unit chief, said the BJP's talk of mandir-masjid, Ali-Bajrangbali, or redefining nationalism, will not resonate with the people as these elections are about issues of development and unfulfilled promises.

In an interview to PTI, he said the 'Modi factor' of 2014 was not going to work this time around as people will not overlook the "incompetencies" of the past five years.

Pilot said his party's performance in the Hindi heartland states will be "excellent" as the BJP stands "totally exposed" there.

"Words like mob lynching and cow vigilantism were not in our discourse till five years ago. There are some powers that are supporting such elements. The kind of venom, the violence that we see, and the kind of acrimony that we have witnessed in the society in the last five years, is unacceptable," he said.

Pilot alleged the BJP is clutching at straws and looking at emotive issues to polarise electorate instead of giving its report card to the people.

On the possibility of the Congress emerging as the single largest party, the 41-year-old leader said he was confident that on May 23, when the results for the Lok Sabha polls are out, the country will have a UPA government and a new prime minister.

He said the issue of who will lead the new government will be decided after the results by all parties sitting together.

Congress chief Rahul Gandhi has certainly led from the front and took on the BJP on various issues, he added.

"At a pan-India level, the Congress is the only party that can challenge and defeat the BJP. Of course all regional parties have an important role to play and the common objective of everyone is that the NDA does not return to power. So, I think the Congress will be in pole position," he said.

Asked about the BJP's poll narrative being centred around nationalism, as well as comments like "Ali-Bajranbali" by Uttar Pradesh Chief Minister Yogi Adityanath, Pilot said there are some people who believe religion can get them votes, but young Indians are more concerned about agrarian distress, unemployment and economic slowdown.

On his aggressive campaigning in Rajasthan and other states such as Uttar Pradesh, Uttarakhand, Maharashtra, and Telangana, Pilot said there is a "wave of change" all over India and he tried to take the Congress' message of development to a maximum number of people.

Pilot, who was appointed deputy to Chief Minister Ashok Gehlot after assembly polls in December, has been on a campaign blitz, addressing about 110 rallies in less than two months in a bid to repeat the party's impressive showing.

Asked about Union minister Rajyavardhan Rathore's remarks that there is an undercurrent in favour of the Modi government, Pilot said 2019 is different from 2014 when people were willing to give a chance to the BJP as it was untested, unverified, and was making tall claims.

But, five years later despite having a clear majority at the Centre and a majority of states under its rule, the BJP has fulfilled "zero" promises -- be it on blackmoney, education, doubling of farm income, or eradicating corruption and naxalism , the former Union minister said.

"There is a wave of change across India and in certain states the BJP will not open its account. In states where it had got maximum seats, it is going to lose a majority of them. There are no areas from where they can make up for that losses in the northern part of India," Pilot said.

Now the judgement of the people will be based on the performance of the government, he asserted, adding that relying on "jumlas" (rhetorics) will not help.

No matter how hard the BJP tries to take the narrative from bread and butter issues to emotive issues, it is not going to work, he said.

Pilot also slammed the BJP for repeatedly invoking Pakistan in poll campaign, saying Indira Gandhi as Prime Minister divided Pakistan into two and over 90,000 of their soldiers were taken as PoWs.

The Congress party has been at the forefront of modernising and strengthening the armed forces and its resolve in protecting the integrity of the borders is absolute, he said.

"Manmohan Singh was PM for 10 years and despite being born in that part (Pakistan), he did not go there because he said that terrorism and friendly relations cannot go hand in hand. That had been his stated policy. Prime Minister Narendra Modi went unannounced to Pakistan and now when the elections are around he is talking about Pakistan," Pilot said.

Talking specifically about Rajasthan, he said people will overwhelmingly vote for the Congress because they know this is the party that is actually going to usher in development.

The BJP is only talking about religion, communities and divisive politics and not focussing on "bijli, sadak, and paani (electricity, roads and water)", he said.