BJP's Gateway To The South: Four Ministers From Karnataka Get Cabinet Berths 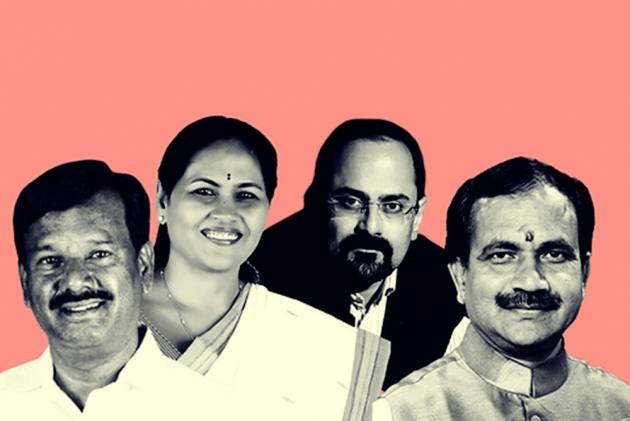 By choosing as many as four new union ministers from Karnataka, the BJP has signaled that the southern state – where elections aren’t very far away – is among those on the radar. Though the existing caste representation has not been altered substantially, political analysts say the running theme – going by the four new choices -- appears to be an attempt to retain the balance and reward local leaders.

Assembly elections will be due in Karnataka – the BJP’s ‘gateway to the south’ -- in 2023 and signs that an election year is fast approaching are starting to become visible on the ground.

With the latest reshuffle, there are now six union ministers from Karnataka, up from four previously. The new entrants are Shobha Karandlaje, A Narayanaswamy, Bhagwanth Khuba, and Rajya Sabha member Rajeev Chandrasekhar (the latter filling in the role of a technocrat, with experience as an entrepreneur and industrialist).

Essentially, there have been some replacements and some new berths. Of the previous four, Prahlad Joshi continues as minister for parliamentary affairs while D V Sadananda Gowda has stepped down (the late Suresh Angadi was the third minister from the state). Of course, the list also includes Finance Minister Nirmala Sitharaman who is a Rajya Sabha MP from Karnataka.

Karandlaje, a former Karnataka minister and a protege of Chief Minister B S Yediyurappa, hails from the coastal subgroup of the Vokkaliga community, like Sadananda Gowda. Bhagwanth Khuba is a Lingayat from the northern part of the state – so was the late Suresh Angadi. The third candidate A Narayanaswamy is a Dalit leader from the Madiga community which is among the most backward of scheduled caste groups in the state and whose support the BJP has counted on in recent elections.

Karnataka has been a key state for the BJP in the south – in the 2019 Lok Sabha elections, the party won 25 of the state’s 28 parliamentary seats, marking its best performance there so far. But in assembly elections, the record so far has been less impressive -- given that the BJP was unable to get past the majority mark on its own steam in 2018 despite winning the largest number of seats. The party came to power in Karnataka in 2019 with the help of rival party legislators who defected.

Political analyst A Narayana offers the view that the rejig alone probably cannot be read as helping to expand the party’s footprint in the state given that these communities already back the BJP strongly. But it could serve to consolidate that position.

But caste representation aside, the other pattern that’s increasingly visible is of the BJP wanting to cultivate the image of a party that recognises loyal and low-profile leaders and party workers. “They seem to be very keen on sending that message across,”says Narayana.