The BJP appears to have smelt blood, and sent top party leaders to campaign for the Hyderabad civic polls 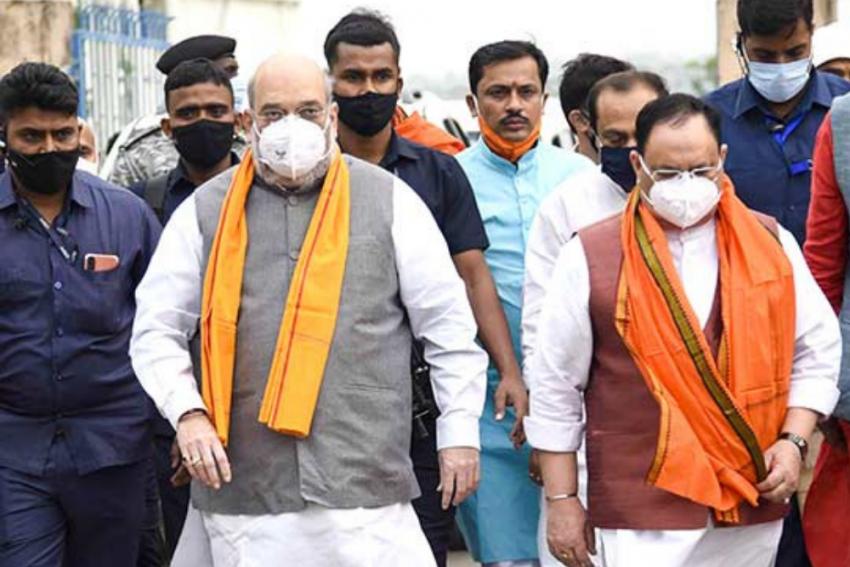 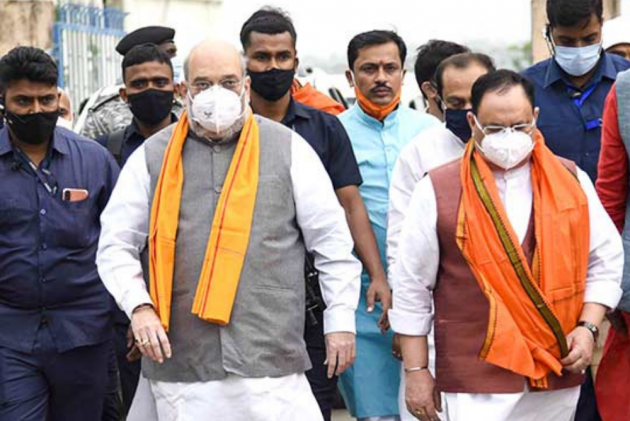 The participation of top BJP leaders like its national President JP Nadda and the Union Home Minister Amit Shah in the Greater Hyderabad Municipal Corporation (GHMC) poll campaign has stirred up an interesting debate in political as well media circles: why is the BJP willing to risk the image of their national leaders?

Prime Minister Narendra Modi visited Hyderabad briefly on Saturday take stock of the Covid vaccine produced at city-based Bharat Biotech, he stayed away from any campaigning. But Union Minister Smriti Irani and the party’s Bengaluru MP Tejasvi Surya have already taken part in the campaign, while Uttar Pradesh Chief Minister Yogi Adityanath too is expected to weigh in.

Seasoned political observers like Brig (retd) GB Reddy feel the reason the behind saffron party’s decision to go all guns blazing in the GHMC elections is a well-crafted strategy to capture the new state, where the elections are due in less than three years. “Even winning 45-50 seats in the GHMC polls taking advantage of the growing anti-incumbency feeling against the family rule of KCR (chief minister Kalvakuntla Chandrashekhar Rao) is sufficient to create panic in the ruling camp, and thus cause a serious psychic blow,” he said. “But no one should be surprised if they breach the number required to stake claim to the Mayor’s post.”

Political analysts wonder whether this high-powered campaign is backed by some inputs from central intelligence agencies or poll surveys which indicate that a strong anti-incumbency wave is blowing against the ruling party. Or could it be the recent victory in the Dubbak assembly poll which led to this ‘psychological’ game with the ruling party, already demoralized by the massive backlash over its failure to deal with the recent flash floods which caused untold misery and damage?

Whatever the reasons, the BJP’s top brass has taken the plunge, backed by a major social media blitzkrieg. Some alleged poll surveys projecting that the BJP could bag as many as 90-95 of the 150 seats sparked panic in both the ruling TRS and its all-weather friend, the AIMIM camps. In the 2016 polls, the TRS had bagged 99 seats, while the AIMIM won 44.

“Gone are the days when the regional sentiment was strong and kicking after state bifurcation in 2014 as the GHMC polls followed after assembly in 2016,” said the BJP state’s chief spokesperson K Krishna Saagar Rao. “Why should they be scared of us, if they have done so much good for the people and have honoured their earlier promises?” he asked.

One could see people’s disenchantment all over as KCR has failed to deliver on ‘Bangaru Telangana,’ the promise to turn the Old City like Istanbul and Hyderabad into Dallas, he said. “Leave those impossible promises. Why has his government failed to build the promised 2 lakh two-bed room houses for the poor residing in various slums?” asked Rao. “Also free Wi-Fi?”

In contrast, the BJP has promised to pay Rs 25,000 compensation to those whose houses were damaged in the heavy rains, and free rides for women in city metros. The party’s GHMC manifesto was released by the former Maharashtra Chief Minister Fadnavis on Thursday.

The state Municipal Administrative Minister, K T Rama Rao who has been made in-charge of the GHMC polls, is leaving no stone unturned to help the ruling party retain the all-important civic body. As a result, Chief Minister K Chandrashekhar Rao agreed to address a massive rally and counter every allegation that the Opposition is making. “Where is the need for BJP top bras to campaign in ‘gully’ polls,” asked an infuriated KTR. But his senior party colleagues look more than confident to romp home comfortably in the December 1 polls, where 75 lakh voters are expected to take part.

It is worth noting that the ruling TRS has not gone for an open alliance with the AIMIM in the GHMC polls, obviously fearing possible dent to their traditional vote bank of Hindus, especially the SCs and STs, besides other backward classes.

The AIMIM leadership’s attempts to polarize their Hindu votes by attacking Telugu icons like the former prime minister P V Narasimha Rao and TDP founder president NT Ramarao, pledging remove their memorial ghats if voted to power, is seen as a sign of the party’s unease by the BJP. The AIMIM’s ire against the former prime minister is because the Babri Masjid demolition took place under his watch. But many fail to understand why the AIMIM Legislative party leader Akbaruddin Owaisi, who also happens to be brother of party chief Asaduddin Owaisi, attacked NTR. In response, state BJP united president Bandi Sanjay visited both the ghats and paid tributes, and dared the AIMIM to demolish them.

Meanwhile, the Congress, which has no major stakes in these elections, blames both the rightist BJP and the AIMIM for vitiating the peaceful environment of the city. “I blame both parties for disturbing communal harmony and peace in the city. Where is the need for either of them to talk such filth?” asked party leader Shashidhar Reddy.