Arvind Kejriwal won the Delhi polls because he recited the Hanuman Chalisa, the BJP leader said. 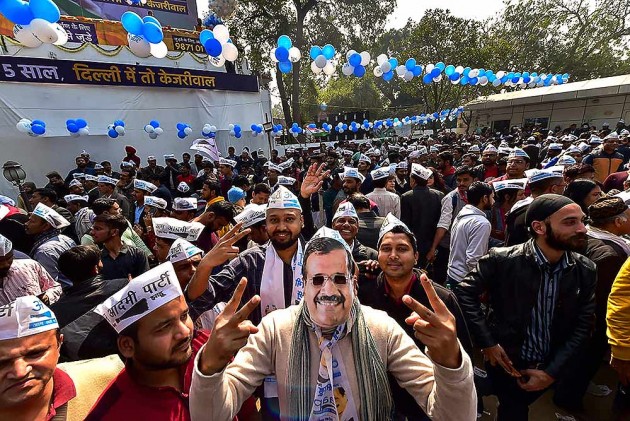 "Kejriwal won the Delhi polls because of Hanuman ji as he recited the Hanuman Chalisa and was blessed by Lord Hanuman otherwise he would not have won," Raina told reporters.

Reacting to the landslide victory of the AAP in Delhi, he said the vote percentage of his party also increased manifold.

"He (Kejriwal) remembered Hanuman for the first time and recited Hanuman Chalisa and he was blessed by the Pawan Putra," he said.

Asked why the BJP was not blessed despite chanting 'Jai Shri Ram', he said the party won the parliamentary elections with a thumping majority because lakhs of party workers chanted the name of Lord Ram repetitively.

Kejriwal on Tuesday paid obeisance at the famous Hanuman temple near Connaught Place as his party headed for a landslide victory in the Assembly polls.

Meanwhile, jubilant AAP activists hit the roads outside the exhibition ground here to celebrate the victory of the party in the Delhi elections.

They distributed sweets before dispersing peacefully.

"The voters of Delhi rejected the politics of hatred and voted for the work done by the party during its rule," one of the activists said, alleging that the BJP left no stone unturned to divide the people on communal lines by raking up the Shaheen Bagh protest.