Actors such as Jackie Shroff, Vivek Oberoi and Poonam Pandey, and singers Kailash Kher and Baba Sehgal agreed to the task, the investigative website found. 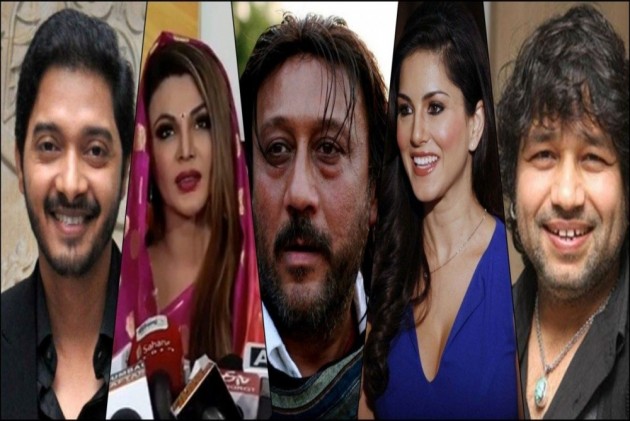 More than 30 Bollywood celebrities, including Jackie Shroff, Kailash Kher, Sonu Sood and Vivek Oberoi, have allegedly been caught in a sting operation for agreeing to promote the agenda of parties on social media platforms in exchange for money, online portal Cobrapost claimed on Tuesday.

Operation Karaoke by Cobrapost had its reporters posing as representatives from a public relations company and meeting actors, singers, dancers and TV stars through their managers to allegedly strike a deal ahead of the upcoming Lok Sabha elections.

Addressing a press conference here, Cobrapost editor-in-chief Aniruddha Bahl said the sting revolves around 36 celebrities agreeing to post messages on their Facebook, Twitter and Instagram accounts to help create a favourable environment for certain political parties in the run up to the elections.

The celebs, most of them second rung TV and film stars, agreed to tweet content on various issues to be provided to them before posting the same on their social media pages to make it look as their own, he alleged.

"They would defend the government even on controversial issues such as rape and fatal accidents such as bridge collapses. They were even willing to sign a dummy contract for endorsement of products to disguise the real nature of the proxy political campaigning that they were willing to do," Bahl said.

According to Cobrapost, the party in question was, in most cases, the Bharatiya Janata Party (BJP) and the Aam Aadmi Party (AAP), and the Congress in some instances.

Many celebrities agreed to share their PAN number and banking details but most preferred cash, he claimed.

The media portal has put out a series of tweets with videos of the celebrities caught in the sting.

Sood released a statement where he alleged that his conversation with outlet's representatives was "wrongly reproduced and projected".

"This is a clear case of sabotage. The editing has been tampered with and only a certain elements of the conversation have been used and projected in the wrong light," he said.

The actor said it is regular for brands, political parties and corporates to use celebrities' social media platforms for promotions. He promoting them is not wrong
as long as one believes in the product and the ideology.

"With reference to the contract, I had also clearly stated that I want everything to be officially put on paper as that is the regular protocol," he added.

According to Cobrapost, most of the celebrities did not blink an eye before saying “Aye” to the proposition, asking for a fee ranging from Rs 2 lakh to Rs 50 lakh per message.

"Some even quoted a fee of Rs 20 crore for an eight-month contract, and almost none of them said no to black money when we told them a bulk of their fee would be paid in cash," the outlet claimed.

Representing a fictitious PR agency and taking on aliases, Cobrapost reporters approached these celebrities asking if they would be willing to promote a political party discreetly on Twitter, Facebook and Instagram.

In a statement on the sting, Cobrapost said some of the celebrities tweeted without having been paid any money to "show their eagerness".

Some celebrities turned down Cobrapost's offer to promote a political party on social media.

"When we approached Vidya Balan, Arshad Warsi, Raza Murad and Saumya Tandon with our proposition, these celebs chose to go by their conscience and straightaway refused to play ball," it said.

TV actor Hiten Tejwani, whose name also figures in the list along with wife Gauri Pradhan, told PTI, "All I can say that we haven’t taken any money ..They wanted to give us money and made a sting out of it ..They are showing half conversations ..the accusations are fake as the Cobra Post."