The book claims that Savarkar had apologised in writing to the British so that he was released from jail. 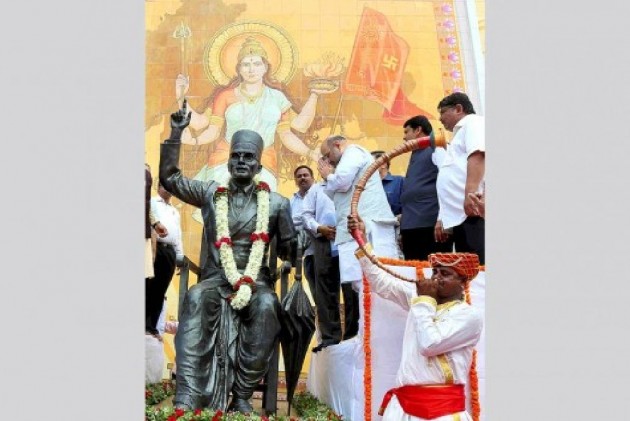 The Congress-affiliated Seva Dal has distributed a book on Hindutva ideologue Veer Savarkar, questioning his credentials as a patriot and his reputation for valour, drawing criticism from the BJP.

It also criticises the Hindu Mahasabha's role during the freedom movement. The booklet has caused a massive furore in the state, with the BJP protesting the act and demanding an apology from the Seva Dal and Congress.

The other Hindutva supporters have also raised objections over the booklet. The literature distributed among 500 participants in a national training camp here, describes BJP and RSS as Fascist organisations.

The booklet titled 'Veer Savarkar Kitne Veer? '(How brave was Veer Savarkar?) claims that when Savarkar was a 12-year-old boy, he threw stones at a Mosque and broke the tiles there. There is also a controversial reference to alleged physical relations between him and Nathuram Godse, Mahatma Gandhi's assassin.

The booklet goes on to say, 'Details of such physical relationship of Godse are found from the period before he took to brahmacharya. It was a gay relationship. His partner was his political guru Veer Savarkar.'

The book claims that Savarkar used to incite people to rape Muslim women. It says Savarkar had apologised in writing to the British so that he was released from jail and assured the Raj that he would not be involved in any political activity again.

The BJP has expressed strong opposition to the distribution of the disputed book in the Congress Seva Dal meeting.

State BJP Vice President Rameshwar Sharma said, "What can be expected from the Congress which burns women in the oven?" referring to the infamous scandal in Delhi in the 1990s where Congress leader had killed his wife and tried to dispose of her body in a tandoor.

Congress spokesperson Durgesh Sharma said, "The literature distributed in the Congress Seva Dal is not new. What has been said about Savarkar is well known. It is well known that he apologised to the British."

He said, "Savarkar had supported Jinnah's idea of dividing the country. All this is literature and Congress had not written it; this was written by litterateurs. The country should know about all these things today because of the way some leaders are declaring Godse as a patriot. People should know who sacrificed for the country and who took the side of the British."

Sharma, however, refrained from speaking about the claim made in the book about Savarkar's relationship with Godse. He did not come forth on the claim that Savarkar used to incite mobs to rape Muslim women either.

Savarkar had described rape as a legitimate political weapon, says the booklet.

Coming at a time when there is a major RSS convention going on in Indore the booklet will lead to far-reaching consequences. As it is the Congress has already been warned by its ally Shiv Sena in Maharashtra to tread with caution on Savarkar.