Book Excerpt: How India Votes And What It Means By Pradeep Gupta

Whether the economy does well or poorly, either way it has hardly any impact on election results, writes pollster Pradeep Gupta of Axis My India 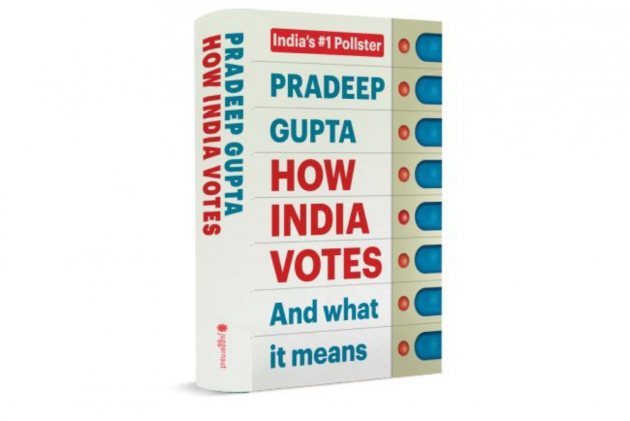 Ahead of every parliamentary poll there is a common chatter in the plush living rooms of big city dwellers – that the state of the economy will have a direct impact on the poll prospects of the incumbent government. But after every such election, the prediction is invariably proved wrong. If we examine the general elections of the last two decades, each one of them has defied this common perception and for fairly good reasons. The Bihar assembly polls that gave the JD(U)–BJP combine a narrow but clear victory – leaving us pollsters, who had predicted a decisive win for the Mahagathbandhan, at our wits’ end – in an environment of economic gloom and a steady fall in the gross domestic product (GDP) bears testimony to the fact that the economy – at least as rich urbanites understand it – has no bearing on poll results. To my mind, the impact of the Covid-19 pandemic upon the state coffers over a reasonably long period of time could alter this trend but not any time soon.

To understand why this is so, we need to look at how the various sectors contribute to our economy and their reach in terms of the voting population that is involved in that sector. Despite being a ‘krishi pradhan’ (agriculture-dominated) country, India draws only 15.87 per cent of its GDP from agriculture, even as a sizeable section of its voting population (roughly 80 per cent) earns at least part of their livelihood from agriculture and allied services. In sharp contrast, the services sector, which is the largest contributor to our GDP at a whopping 54.4 per cent (2018–19), remains concentrated in twenty to thirty cities while industry contributes 29.73 per cent. The services sectors like information technology, courier, media and entertainment and banking are clustered in some metros and tier I and II cities like Delhi, Mumbai, Bengaluru, Hyderabad, Ahmedabad and Pune. It is only in unprecedented times like the Covid-19 pandemic that we witnessed migrant labour distressed and displaced during the initial nationwide lockdown.

Even if we were to assume that the 4.68 crore migrant labour in the country affected during the Covid-19 crisis were upset with the government’s handling of their situation or the economy, that population is only a fraction of the total 25 crore households that end up voting. The impact is not more than 20 per cent but let us also not forget that only 50 to 60 per cent of the urban voters cast their ballot. If the migrant worker population is happy with the state of the economy then there could be some impact on the economy, nonetheless marginal in my opinion. Overall, whether the economy does well or poorly, either way it has hardly any impact on poll results.

A look at election outcomes over the last two decades summarizes my arguments succinctly. The backdrop of the 2004 ‘India Shining’ poll campaign led by then prime minister Atal Bihari Vajpayee showcased his much-hyped economic optimism. The GDP growth rate that year was on a high at 7.92 per cent and there was a general consensus on the economy faring well under Vajpayee. Yet he lost to the United Progressive Alliance and fell sharply from his previous tally of 182 seats to 135. Andhra Pradesh emerged as a microcosm of the same phenomenon that was playing out at the national level. Despite Chandrababu Naidu’s stellar performance in the state with a booming IT industry – the emergence of Satyam as a big player (this is back when Satyam was an IT icon rather than a scandal), setting up of Ramoji City, etc. – the chief minister, whose party was the second largest in the NDA coalition government of 1999, flopped, and how. Conversely, in 2009, when the world was going through one of its worst recessions, Prime Minister Manmohan Singh comfortably led the UPA to a second term. Again, in Andhra Pradesh at that time, Y.S. Rajasekhara Reddy, who was seen as a leader of farmers – unlike Naidu, who was a mascot of growth and technology – steered his party to a clear victory and also contributed heavily to the UPA, sending 33 MPs to the Centre from the 42 seats in the state.

In 2014, despite a GDP growth rate of 7.41 per cent, a 1.02 per cent increase compared to the previous year, the Manmohan Singh government crumbled to debutant Narendra Modi. The 2019 general elections stood testimony once again to the fact that the state of the economy does not change a party’s prospects. The Modi government came back stronger at a time the economy plummeted to an eleven-year low of a 5.02 per cent GDP growth rate.

A wobbly economy does not necessarily mean huge cuts in public spending and, as I stated earlier, all governments, at the Centre or state, are judged entirely on their ‘delivery’, that is, essentially pro- poor policies and social security spending. One can argue that if the economy is not doing well then tax collections are also badly hit, but the question is ‘how badly’. For if government tax collections are below expectations, the defence budget can always be trimmed as a first measure. If you look at the global scenario in such years, then warlike situations usually do not arise in such circumstances/recession years. Even in the Covid-19 crisis, India and China would not want to wage war, regardless of their political posturing. Central and state governments also look at quick revenue raisers such as collections from alcohol, which became a saviour during the early nationwide lockdown days across states. Petrol/diesel taxes have also been a source of increased revenue collection during the recent economic slowdown.

Effectively, public spending is hardly affected unless an unforeseen crisis like the Covid-19 pandemic wreaks havoc on the economy and the government is forced to rework its priorities. But, in a low-growth year, even if business houses are affected, their profit percentage may have gone down but they would still have made a profit that year. No loss or even a low profit rate leaves a sentiment of loss in the business community that in turn impacts their advertising and media spending and the latter takes it upon itself to amplify a sense of doom among the people.The common man mostly remains untouched by this but the perception creators in the media studios cry themselves hoarse because their revenue that comes from corporates and business houses is curtailed. Voters on the ground have nothing to do with this perception and hence their preferences see no change. For farmers, monsoons are a huge factor and a drought or hailstorm would hit their pockets. Elections could sway in an altogether different direction if the incumbent government does not pay attention to farmers’ demands in such a situation or if the opposition makes a more credible promise. The longer-term political impact of the ongoing farmers’ protests remains to be seen. We can never deny the existence of two Indias – a krishi pradhan Bharat and a more elite India – both of which have different sets of priorities and both of which vote differently.

Pradeep Gupta is the founder of Axis My India. His book 'How India Votes and What it Means' is out now.