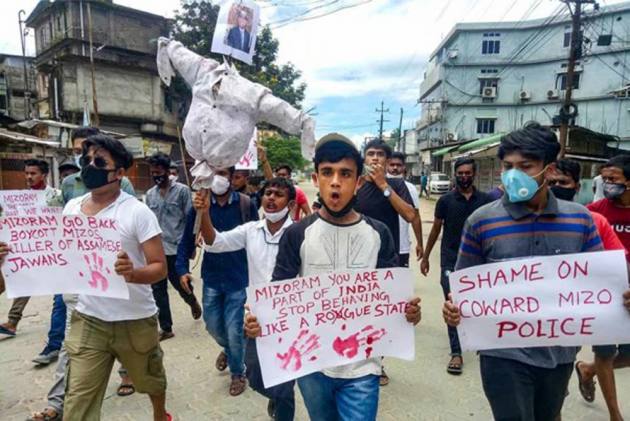 In yet another step towards de-escalation of tension at the Assam-Mizoram border, Assam Police on Monday withdrew a case against Mizoram Rajya Sabha MP K Vanlalvena as a “goodwill gesture” at the directive of chief minister Himanta Biswa Sarma. However, criminal proceedings against "erring" Mizoram policemen and other miscreants involved in the incident of July 26 in which six Assam Police personnel were killed will continue. The move comes a day after Mizoram said it would not proceed against Sarma, who has been booked along with six state officials, on various charges.

In a tweet Sarma acknowledged his Mizoram counterpart Zoramthanga’s “desire to settle the border dispute amicably”, adding that Assam always wants to keep the spirit of northeast alive. “We are also committed to ensuring peace along our border,” he said.

1/1
I have noted statements in media by Honble CM @ZoramthangaCM wherein he has expressed his desire to settle the border dispute amicably. Assam always wants to keep the spirit of North East alive. We are also committed to ensuring peace along our borders.

He followed it up with another tweet saying, “To take this goodwill gesture ahead, I have directed Assam Police to withdraw FIR against K Vanlalvena, Hon’ble MP, Rajya Sabha, from Mizoram. However, cases against other accused officers will be pursued.”

The case against Vanlalvena was filed after he said that next time Assam policemen enter the state, all of them would be killed without exception. An Assam Police team visited Delhi on Saturday and served summons asking him to appear before the Dholai police station in Cachar district on Sunday.

Meanwhile, Mizoram had also booked Sarma and six Assam officials in connection with the July 26 conflagration but has decided to take his name off the police FIR. State chief secretary Lalnunmawia Chuaungo on Sunday said that the chief minister, Zoramthanga, did not approve of naming Sarma in the FIR. The Assam chief minister on Sunday said he was ready to be arrested if that helped restore peace and end the border dispute. “I will walk from Silchar to Vairengte to be arrested if required,” he said.

The two chief ministers have agreed to find an amicably settle the border dispute between the two states after Union home minister Amit Shah intervened on Friendship Day and spoke to both of them. Zoramthanga has also urged the people of his state to “avoid posting sensitive messages” on social media.

Assam has, however, decided to move the Supreme Court. Sarma said on Sunday it might take time to prepare the petitions but advocates were on the job. “Let the Supreme Court judge who is right and who is wrong, why should we fight among ourselves,” he said.

While both sides have offered each other the olive branch, the situation at ground zero is far from normal with the blockade imposed by some civil organisations in Assam since July 26 in retaliation to the firing by Mizoram police that killed the six Assam Police personnel, still in place. It has left several hundred vehicles carrying goods to the hill state stranded on National Highway 306 in Cachar district. Some of the stranded vehicles are also reported to be carrying equipment meant to fight Covid-19 which the state is grappling with. Among these equipment are oxygen concentrators and around two lakh rapid antigen testing kits. Miscreants also damaged a section of the railway tracks in Hailakandi district holding up 21 wagons carrying a consignment of rice.