Miscreants vandalised several vehicles, which had started moving towards Mizoram, at Lailapur in Assam's Cachar district forcing them to turn back. 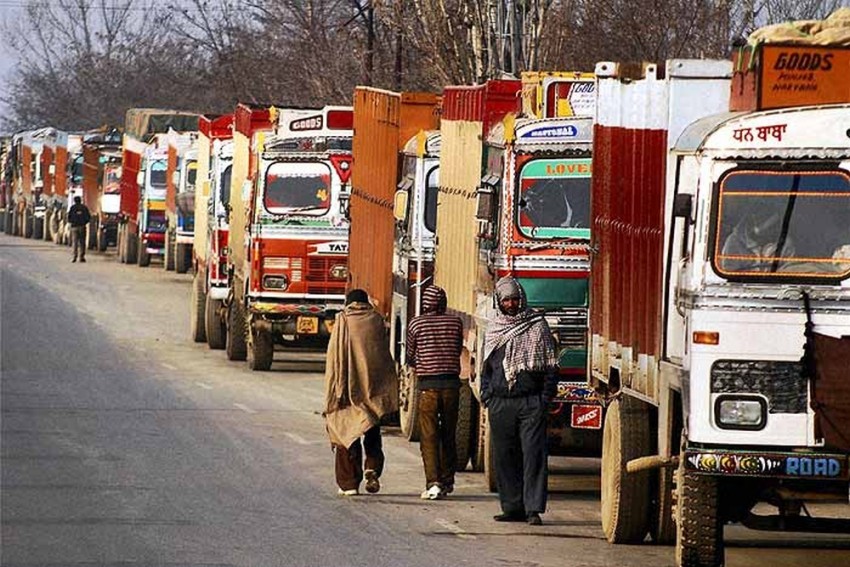 Assam’s efforts to lift the blockade at the border with Mizoram -- where "Covid-19 patients are dying" for want of medicines -- on Saturday evening ran aground after miscreants vandalised several vehicles, which had started moving towards the neighbouring state, at Lailapur in Cachar district forcing them to turn back.

According to reports, two Assam ministers Parimal Suklabaidya and Ashok Singhal were still in talks with public representatives and the deputy commissioner and superintendent of police of Cachar district when some of the vehicles started moving.

This apparently enraged the people who then resorted to pelting stones and vandalism. However, peace was restored after the deputy commissioner and the SP intervened. The reports quoted some truckers to say they were asked by the police to move.

Some vehicles which were released from Mizoram House in Silchar also came under attack at Lailapur, according to the deputy resident commissioner, S Kaptluanga. “The vehicles were attacked around 6 pm. “The Assam Police is cheating my people, last year also on October 31 they did the same thing. They escorted my people pout of the Mizoram House and then left them at the mercy of the angry mob at Lailapur. So many windshields are broken. They (Assam Police) exposed them (Mizoram people and vehicles) to a great risk,” he was quoted as saying.

The two ministers were deputed by chief minister Himanta Biswa Sarma to the border to hold talks with those sponsoring the blockade since the July 26 flare-up in which six Assam Police personnel were gunned down by their Mizoram counterparts over the decades-old border dispute.

Suklabaidya had earlier stated they would talk to the people to convince them to allow the vehicles to move to Mizoram. “They are angry after the six policemen were killed,” he said. But, he also said some drivers were themselves not keen to go to Mizoram fearing trouble. “We will see if we can get some trucks carrying medicines and other essentials like fuel to travel to Mizoram tonight,” he said.

In a video message on Friday Mizoram health minister Dr R Lalthangliana said it was very difficult to manage patients who were in dire need of oxygen given the limited supply due to the blockade. “Covid-19 patients are dying for want of medicines...which are still stuck on the other side of the border, this act of arrogance is clearly in violation of basic human rights and the right to life under Article 21 of the Constitution of India,” he said. Besides, other basic necessities such as PPE kits are also held up.

Sarma later appealed to the people to allow the vehicles to move while asserting that Assam was committed to safeguarding the state’s constitutional boundaries.

Lalthangliana said that machinery for establishment of an oxygen plant at Zoram Medical College were still stranded at Guwahati. The oxygen plant is supposed to be commissioned before August 15 as per the directive of the Centre.

After the July 26 flare-up, Assam and Mizoram held a meeting on August 5 in an effort to defuse tensions at the border and work towards finding an amicable settlement of the decades-old dispute between the two states.