Though the CPI (M) General Secretary did not name the 'private trust fund' he was referring to, he has often attacked the government over PM-CARES Fund terming it a 'private trust'. 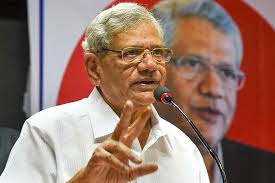 Accusing the government of denying states their legitimate GST dues, CPI(M) leader Sitaram Yechury Tuesday said it must borrow from the RBI or release money from “a private trust fund”, an oblique reference to the PM-CARES Fund, to pay the states.

“Modi government must immediately borrow from RBI and pay the states their legitimate GST dues. At least now Modi must release ? thousands of crores amassed in a private trust fund bearing his name to the states to strengthen the combat against Covid,” Yechury said in a tweet.

Though the CPI (M) General Secretary did not name the “private trust fund” he was referring to, he has often attacked the government over PM-CARES Fund terming it a “private trust”.

In a tweet on July 7, he had said, “Thousands of crores are collected by a private trust bearing PM’s name, using govt authority. This is non-transparent, non-auditable, hence non-
accountable. Shameful: Money is made in the name of combating the pandemic, as people suffer from this health emergency. Another Scam.”

The Supreme Court had recently refused to order transfer of funds from the PM CARES Fund to the National Disaster Response Fund (NDRF), saying they are two “entirely different funds with different object and purpose”.

It had also said there was “no occasion for audit by the Comptroller & Auditor General of India” as PM-CARES Fund was a public charitable trust.

On Tuesday, Yechury also hit out at the government over reports that the Centre was seeking updates on coronavirus directly from district officials thus “bypassing” the elected
governments.

“PM to DM minus CM! States are on the frontline combating the pandemic. Instead of helping them, Centre denied paying them their legitimate GST dues. Now it bypasses the elected governments, gets officers to report directly. Surveillance?” he said in another tweet.