The Commission, to be named as ‘Samanya Varg Aayog’, will be formalised through a legislative enactment when the Himachal Pradesh assembly meets next in February-March 2021 for the budget session of the House. 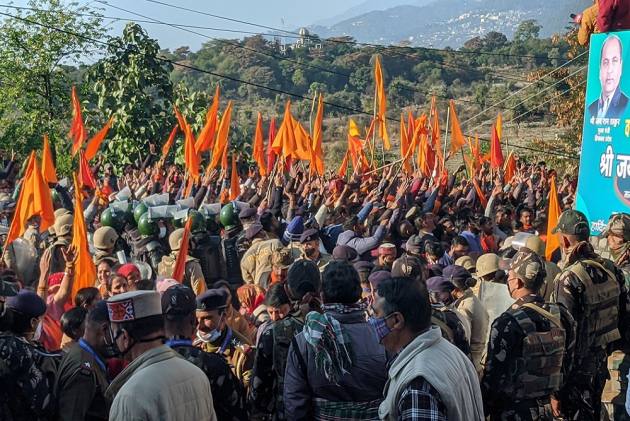 Bowing to day-long protests and a threat to ‘block’ roads leading to state assembly at Dharamshala, Himachal Pradesh Chief Minister Jai Ram Thakur on Friday announced setting up Commission for upper castes, on the lines of Madhya Pradesh, another BJP ruled state.

The Commission, to be named as ‘Samanya Varg Aayog’, will be formalised through a legislative enactment in three months' time when the state assembly meets next in February-March 2021 for the budget session of the House, Chief Minister Jai Ram Thakur said.

CM Jai Ram Thakur’s announcement came after an unprecedented show of strength, unruly scenes, road blockade and dharna by activists of two agitating organizations, ‘Devbhumi Kashtriya Sangthan’ and ‘Devbhumi Swarna Morcha’, representing the upper castes in Himachal Pradesh, whose population is estimated to be around 51 percent, of which 32.72 % are Rajputs and other 18 % are Brahmins.

The day was marked by massive protests outside the state assembly complex as the House started its five-day long winter session at Dharamshala.
The organizations had given a call for gherao of the state assembly and blocked all the roads leading to the House to make the government accept their demands.

Hundreds of volunteers of upper castes, raising anti-government slogans, carrying banners and saffron flags converged from all over the state near Tapovan, the venue of the state assembly.

Though the police, which was deployed in full strength, tried to stop them from marching towards the assembly complex, a distance of 5 km, the protesters broke the police barricades to reach the main entrance of the assembly.

Eye witnesses have also reported pelting of the stones and threats to the police of violent reactions if they tried to use the force to stop them.

The protesters blocked the road and main entrance of the state assembly insisting that Chief Minister should come to the venue and announce setting up of ‘Swarna Aayog’ on the lines of separate commissions already set up by the state government for Scheduled castes , Scheduled Tribes, Gaddis and OBCs –all statutory bodies .

Initially Chief Secretary Ramsubhag Singh and Director General of police Sanjay Kundu tried to engage the protestors in dialogue and assured them acceptance of their demand and urged them to go back home. But the protesters refused to budge.

Thereafter two cabinet ministers, Mohinder Singh and Suresh Bhardwaj, Jal Shakti and Urban Development ministers respectively, also arrived at the scene. But the protestors wanted the Chief Minister to come and accept their demand and threatened that they will start a farmers’-type of indefinite dharna.
The government was virtually brought to its knees by the protesters who looked determined not to return unless their demands are accepted 'on the spot' and that too by the Chief Minister .

Finally, the Chief Minister was compelled to reach out to the protesters under heavy security to make an announcement about acceptance of the demands of the protesters, who still refused to leave the place unless they were handed over a written assurance and an announcement to this effect in the state assembly.

Later making a statement in the House, the Chief Minister said a large number of people belonging to General section of society cordoned the Assembly seeking demand of setting up ‘Swarna Aayog’ to streamline the caste equations in the state, besides economic and social upliftment of every section of the society.

“Our government has decided that a general category commission will be constituted in Himachal Pradesh, the notification of which is being issued immediately,” he assured.

Rumit Singh Thakur, President of the Devbhumi Kashtriya Sangthan had held a 25-day padyatra to Haridwar and back to Dharamshala, covering a distance of 853 kms, during which they had faced seven FIRs lodged by the police at the behest Bhim Army and other reserved categories.