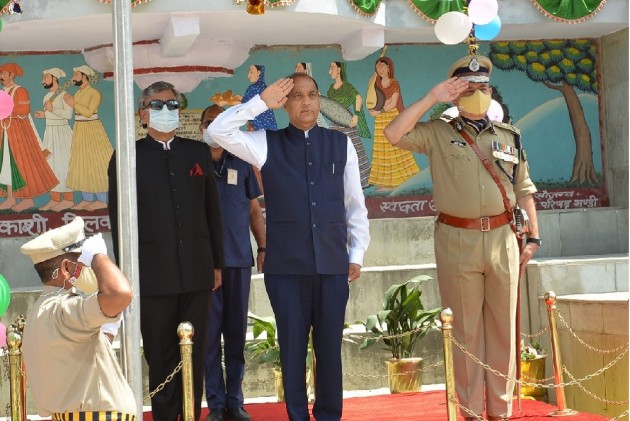 This is the first time, after Thakur became Chief Minister, he unfurled the tricolour at Mandi to celebrate Independence Day at the state level.

Functions were also held in all the districts, sub-divisions, tehsils and panchayats.

The Chief Minister had given a call to all people of the state to unfurl the national flag at every house to give a befitting answer to the anti-national forces operating from foreign soil.

The Chief Minister paid rich tributes to the freedom fighters, went to the garland statue of Father of the Nation Mahatma Gandhi and appreciated the role played by the Covid warriors in saving lives of the people infected with the coronavirus.

Thakur, who addressed the people of the state from the famous seri manch at Mandi, announced release of arrears of DA for nearly four lakh government employees and pensioners payable from July 1,2021.

This will impose an additional annual burden of Rs 450 cr on the state exchequer.

The Chief Minister announced major food subsidy benefits for all BPL and APL families. He enhanced subsidy provided to the BPL on edible oils from existing Rs 10 per liter to Rs 30 per liter. The APL families will also get a hike from Rs 5 to Rs 10 per liter for the next four months. This would benefit over 18.71 lakh card holders of the state.

The chief minister spoke about state’s development and his resolve to ensure a balanced development of all the areas of Himachal Pradesh besides making serious effort to see that the state becomes a global hub for investments. Nearly 10,000 cr worth investment proposals are awaiting ground breaking ceremony.

The I-Day function also holds significance as Mandi is likely to witness bypoll to this Parliamentary constituency, which had fallen vacant due to the demise of BJP leader Ram Swaroop Sharma .

The elections could not be held because of Covid 19 crisis. There are chances of poll being held in September-October 2021. The BJP has stakes quite high in this in view of the fact that Chief Minister hails from the area.