BRICS To Focus On Global Economic Devastation Caused By Pandemic

India will host the BRICS summit later this year 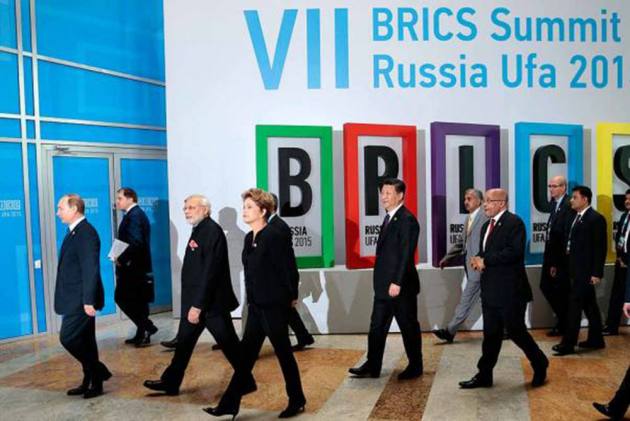 Foreign ministers of Brazil, Russia, India, China, and South Africa (BRICS) held a virtual meeting called by India on Tuesday for a preparatory conversation ahead of the next summit to be hosted by India later this year. India is on the chair of BRICS on this, the 15th anniversary of the group’s founding. Unfortunately, though it began with much fanfare and ambitions of providing an alternative to the western financial and development models, it has been unable to live up to its promise, mainly because of a major change in international and diplomatic power play.

For one, two members of the group-- India and China were locked in a tense military stand-off last summer in Ladakh. While the tension has eased considerably the situation is not back to normal, and the gaping trust deficit between the two Asian giants will take time and hard work to heal. Besides India’s participation in the quad together with the US, Japan, and Australia is regarded by China as a potential alliance to contain its rising military and political power in Asia. In the meantime, relations between the US and both China and Russia are strained. All this accounts for a political divide between members of BRICS. Yet neither India, China, or Russia would want to abandon BRICS. So, it will continue and will pick up steam only after the differences between India and China can be smoothed out.

In his opening remarks foreign minister Jaishankar said the Covid-19 pandemic “continues to provide the larger context in which we assess the world and our policies. This is a time to reflect on its many implications.’’ The devastation caused to the world economy by the pandemic will naturally figure prominently in the discussions both today and during the actual Summit. Laying down India’s theme for the summit, Jaishankar said: “Our collective endeavour is to ensure that global decision-making reflects contemporary realities. To this end, we have identified four key deliverables for our Chairship - Reform of the Multilateral System, Counter-Terrorism Cooperation, Using Digital and Technological Solutions to achieve SDGs, and Enhancing People to People Cooperation.’’

Is China Sending Out Mixed Signals To India?

The pandemic was discussed in detail by the foreign ministers. The statement at the end of the meeting termed it as "one of the most serious global challenges in recent history,’’ noting that it wreaked "immeasurable political, economic and social damage,’’ across the world. The lesson to be drawn is that "...in an intertwined world, truly effective and representative multilateralism is no longer an abstract ideal to be evoked in matters of war and peace alone, but an essential tool for ensuring successful governance of matters of everyday life and promoting well-being of people and a sustainable future for the planet.’’

The summit later this year will be the third BRICS meet in India, the first was in 2012 and the next in 2016. BRICS began with a preliminary meeting of foreign ministers in 2006, on the sidelines of the United Nations General Assembly session in New York.

The New Development Bank (NDB) is one of BRICS major achievement. The bank had helped fund infrastructure projects in several member states. So far as many as 76 projects have been financed by the NDB. The BRICS bank had been a major talking point when it began with Western nations regarding it as an attempt at alternative financing by the developing world led by China. Much of those fears have subsided as President Xi Jinping and China had placed its energies on the Belt and Road Initiative. India has steadfastly refused to join the BRI.