The statement assumes significance in view of the outcry over the rise in petrol price for the past over one year that touched Rs 100 per litre in some states. 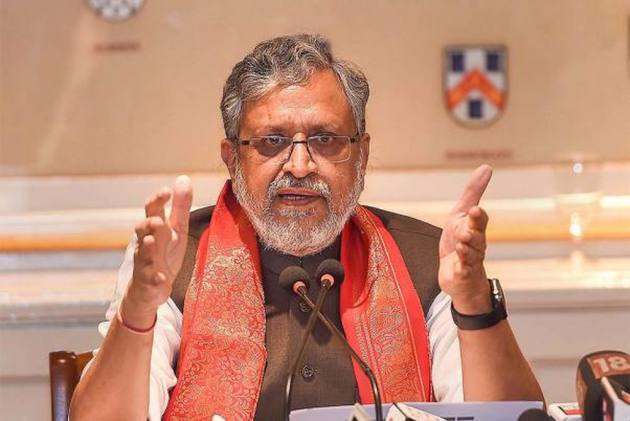 BJP leader Sushil Kumar Modi on Wednesday said that it is not possible to bring petrol and diesel under the GST regime for the next eight to 10 years saying that if done so, it would cause an annual revenue loss of Rs 2 lakh crore to all states.

During a discussion on the Finance Bill 2021 in the Rajya Sabha, Modi told the upper house that centre and states collectively collect over Rs 5 lakh crore tax on petroleum products.

The statement assumes significance in view of the outcry over the rise in petrol price for the past over one year that touched Rs 100 per litre in some states and the demand by the Congress and some other parties that petrol and diesel be brought under the GST regime.

Finance Minister Nirmala Sitharaman had on Tuesday said in Lok Sabha that she would be "glad" to discuss the suggestion of bringing petrol and diesel under the ambit of the Goods and Services Tax at the next meeting of the GST Council.

Sushil Modi said it is easy for opposition leaders to make statements outside, but no one raises these issues within the GST Council.

"I want to tell this House that it is not possible to put petrol and diesel under the GST in the next eight to 10 years, as no state is ready to lose Rs 2 lakh crore revenue, be it the Congress or any other government," he said.

He said the Centre and states together earn over Rs 5 lakh crore annually from tax on petroleum products.

"People in the opposition make fun of the GST regime and someone has also said it is 'Gabbar Singh Tax'. If you have the courage....all states have a presence there ... (Congress-ruled) Chhattisgarh or Rajasthan, no chief minister or finance minister has ever opposed the GST structure.

He explained that if petroleum products are brought under the GST, 28 percent tax would be collected on them as that is the highest slab in the tax regime.

"Presently, 60 percent tax is being collected on petroleum products. This would result in a shortfall of Rs 2 lakh crore to 2.5 lakh crore (to both the Centre and states)," he explained in the House.

"If we collect 28 percent tax on petroleum products, then only Rs 14 would be collected (per litre) against Rs 60 at present," he pointed out.

"If petrol or diesel price is Rs 100 (per litre) then the tax component is Rs 60 which includes Rs 35 for Centre and Rs 25 for respective states. Besides out of the Rs 35 tax per litre, 42 percent goes to states," Modi added.

He also slammed those casting doubts on the use of revenue generated from diesel and petrol, stressing that the money is used for development activities.

Sushil Modi had been the convener of the GST Council in his capacity as the finance minister of Bihar for a long time.

In the first reduction in rates in over a year, petrol price on Wednesday was cut by 18 paise per litre and diesel by 17 paise per litre as international oil prices tumbled to the lowest since early February.

Petrol price was cut to Rs 90.99 per litre in Delhi from Rs 91.17 per litre. Diesel now comes for Rs 81.30 a litre in the national capital, down from Rs 81.47 previously.       Rates have been reduced across the country and vary from state-to-state depending on the local incidence of taxation (VAT).