Mumbai-based artist, Prabhakar Kamble spoke to Outlook about his work – Broken Foot which appears on the cover of our latest edition. On stands today. 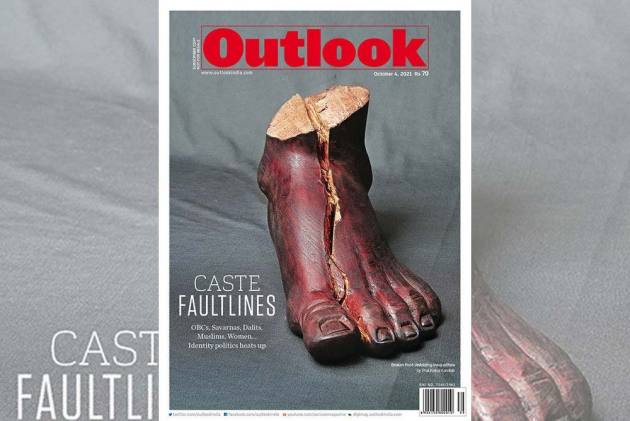 Prabhakar Kamble is a Mumbai based artist. He is also a curator and a cultural activist. His artistic work involves his response to immediate social realities as well as personal and collective histories. His realities are derived from lived experiences and as a social commentator. Kamble spoke to Outlook about his work – Broken Foot which appears on the cover of our latest edition.

Q. What inspired you to create the Broken Foot?

A. It was during the first wave of the Covid-19 pandemic, when a mass exodus of migrant labourers took place all over India that I started working on this piece. It was a statement against the apathy of the state towards a certain section of the society.

Cycle Of Life: Nitish Kumar Shows How To Win Over Women And Win Elections

Policymakers Must Consider The Many Upsides Of Caste Census

Gender As A Caste: How Does Women Fit Into Vote-Bank Politics

Q. What is the medium of the work and what is the inherent message?

A. The medium is wood. The Broken Foot is a representation of the men and women who have been on foot for days during the pandemic to go back to their villages. The sheer apathy of the system for a large section of the society that builds homes, offices, bridges and cities was apparent. Some of them were even walking barefoot. We thus managed to break the feet of the people who support us.

Q. Apart from being a comment on the migrant workers, is the Broken Foot also a comment on India’s inherent caste system.

A. They are linked – as most of the people who support the system are usually still from a certain caste bracket that the comment on the situation of our workforce can’t be too far from a comment on caste.

Description: Broken Foot I Medium – Wood I Size 6”X6.5”X12” I Year 2020
“A force which built homes, offices, bridges and the cities as we know and imagine, a force that raises the economy of the nation; a force that builds the Nation. The Constitution unfolds as a live text as millions of feet march thousands of miles homewards. What were the conditions which made them take arduous journeys on foot, till the time their feet developed cracks like cracked earth. These are broken people of the times, broken from their homes. Can one stand united as a society on a broken foot? In the context of inequality we can’t progress as a nation with a broken foot, a divide called discrimination, as the Pandemic starkly reveals.”