Piyush Goyal on Friday presented the interim budget 2019-20 in the parliament, marking the last budget of PM Narendra Modi-led BJP government ahead of 2019 General Elections. 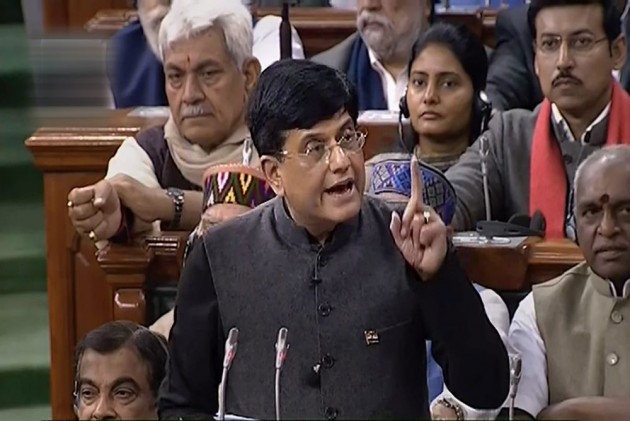 Making a big populist push in its final budget before elections, the Narendra Modi-government on Friday exempted people with an earning of up to Rs 5 lakh from payment of income tax, announced an annual cash dole-out of Rs 6,000 to small farmers and provided a monthly pension of Rs 3,000 to workers in the unorganised sector.

Converting what was supposed to be an interim budget or a vote on account into an almost full-fledged budget announcement in the Lok Sabha, Finance Minister Piyush Goyal proposed an array of incentives for both middle-class and farmers, whose disenchantment was said to have cost the BJP dearly in recent assembly elections.

Fiscal Deficit To Be At 3.4% Of GDP This Year, Says Piyush Goyal In Budget Speech

Over 3 crore salaried class, pensioners, self-employed and small businesses with total income of up to Rs 5 lakh will have to pay nil tax now against their current liability of Rs 13,000 (including health and education cess) in view of the relief Goyal provided in form of a 'rebate'. Individuals with gross income up to Rs 6.5 lakh will not need to pay any tax now, if they make tax saving investments of Rs 1.5 lakh under Section 80C of the Income Tax Act.

However, very senior citizens (aged 80 years and above) are not impacted by this change as their total income up to Rs 5 lakh was anyway not subject to tax.

The rebate will cost the government Rs 18,500 crore in revenue.

At a post budget press conference, Goyal promised to look into giving relief to taxpayers with an income of over Rs 5 lakh in the main budget to be presented in July.

Other proposals include increase in the TDS exemption limit from Rs 10,000 to Rs 40,000 for bank interest, on rental income from Rs 1.8 lakh to Rs 2.4 lakh, extending housing income exemption from one to two self-occupied houses, capital gains from sale of house property being allowed to be invested in two properties instead of one and the 10-year window for registration of affordable housing projects for getting tax relief.

As was widely anticipated, Goyal announced an income support scheme for 12 crore small and marginal farmers by providing Rs 6,000 in their bank accounts in three equal installments in a year, which will cost Rs 75,000 crore a year to the government.

The eligibility for the scheme, called Pradhan Mantri Kisan Samman Nidhi, will be ownership of less than two hectares of cultivable land.

Though the finance minister said the scheme will be implemented from the current fiscal year, where it will cost Rs 20,000 crore, it wasn't clear how the beneficiaries would be identified.

A mega pension scheme was introduced to provide a monthly pension of Rs 3,000 with a contribution of Rs 100 per month for workers in the unorganised sector after 60 years of age.

While Prime Minister Narendra Modi said the interim budget was merely a "trailer" of what will guide India towards prosperity after the Lok Sabha polls, Congress president Rahul Gandhi said that the government was giving Rs 17 a day to farmers after "destroying" their lives in last five years.

Former finance minister P Chidambaram termed the union budget as an "account for votes" and not a "vote on account".

The farm income support scheme will result in the government breaching its 3.3 per cent fiscal deficit target from the current year and slipping on 3.1 per cent target for the next. Fiscal deficit for both the years has been put at 3.4 per cent of the GDP.

The relief in income tax for the middle class came in form of a rebate. A rebate is different from a general exemption which would have meant income up to Rs 5 lakh for all would have been exempt from taxes and taxes would have to be paid only on income in excess of that.

Justifying inclusion of tax proposals in an interim budget which normally is only to seek approval of Parliament for spending for an interim period until a new government is sworn in, Goyal said, "Though as per convention, the main tax proposals will be presented in regular budget, small taxpayers especially middle class, salary earners, pensioners and senior citizens need certainty in their minds at the beginning of the year about their taxes."

"Therefore, proposals, particularly relating to such class of persons should not wait."

The NDA government, he said, has laid the foundation for India's growth and development for times to come. India is poised to become a USD 5 trillion economy in the next five years.