A charred, deserted neighbourhood with streets covered with matchboxes is a telltale remain of unprecedented violence 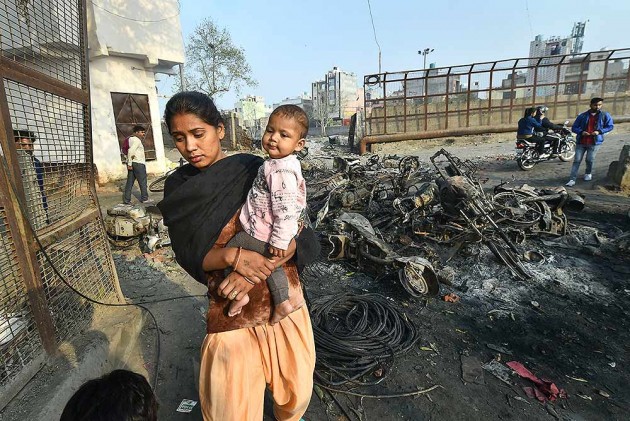 Four days after communal riots rocked Northeast Delhi, an uneasy calm prevails. Few shops have opened, and auto-rickshaws can be seen on Wazirabad Road, the area which is lined with marks of violence. On this road, stands a petrol pump that was set on fire, uncountable torched vehicles and Chand Baba's Dargah – all remnants of the violence that engulfed the northeastern part of the city and left at least 42 dead.

Police say ‘normalcy’ has returned to Northeast Delhi to a 'large extent'.

But as you enter the bylanes leading to Brijpuri area, one of the most-affected areas, signs of comparative normalcy slowly disappear. The entry point to the road, where broken and burnt houses stand now, is guarded by CRPF officials. Few anxious people can be seen around as a sombre ambience settles there. Some residents have started fixing broken doors and windows while few others have already packed their bags and left.

As Uneasy Calm Prevails Over Northeast Delhi, Victims Share Stories Of Their Ordeal

An elderly man, Jagroshan Lal, cleans the front of his house where pool of oil and broken furniture has accumulated. "This is edible oil from the godown beside our house," Lal said. "But that drum is full of petrol the mob had brought to burn our houses," he says pointing at a sealed red container lying in front of his home’s stairs.

Describing the scenes of violence, he says a mob wearing helmets attacked their neighbourhood, inhabited predominantly by Hindu families. 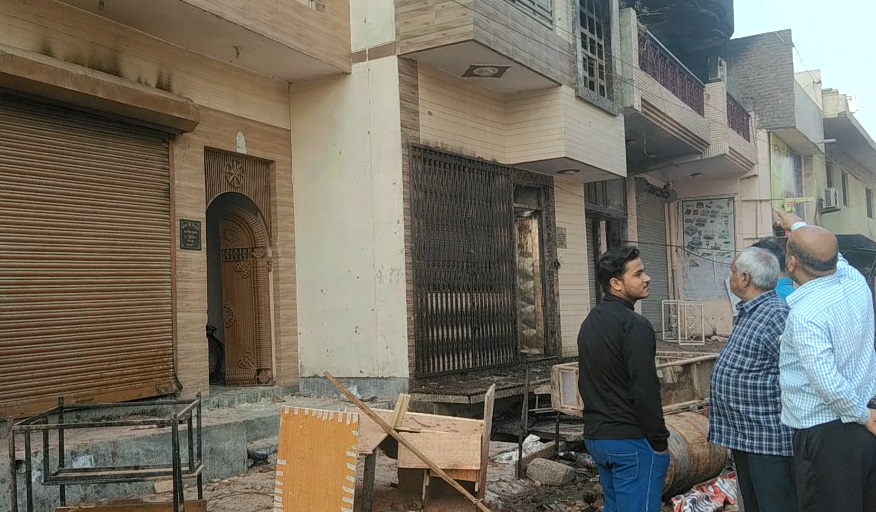 Jagroshan Lal's house, which was attacked by a mob, in Brijpuri, Northeast Delhi. (Photo: Aritry Das/Outlook)

"They tried to break our door, put outside of the ground floor on fire," Lal said in a trembling voice as he recalled the attack. "Had they been successful in breaking this door, they would have killed us too."

The Hindu neighbourhood and the adjacent Muslim neighbourhood in Brijpuri is roughly divided by Arun Model School, a private school which was attacked by the mob. The library, principal's room, classrooms, furniture, school compound - everything has been burned to ashes. A heap of burnt books piles up near the gate as the school is being cleaned under the owner's watch. A bus and two cars parked inside the school have also been torched.

The owner of the school, Bhisham Sharma, says the riot won't be able to create animosity between the two communities who have lived together for years. He adds that Muslim community leaders have been meeting him in order to maintain peace.

Right next to the school is Faroqiya Masjid and a madrasa which too were set ablaze. The attack happened during Maghrib Azaan and the Imam was shot inside the mosque. He is fighting for his life in hospital. Residents around the mosque say children were stuck inside the shrine when it was torched. Locals said they managed to rescue people through a backdoor but gunfire continued in the area till night, even after police reached there.

The mosque and the school became targets as they were located beside the Brijpuri canal where a sit-in protest against CAA and NRC was going on for 39 days. Locals say the women at the protest site were also attacked, and the site was vandalised.

The walls around the canal still bear the slogans – No NRC, No CAA. 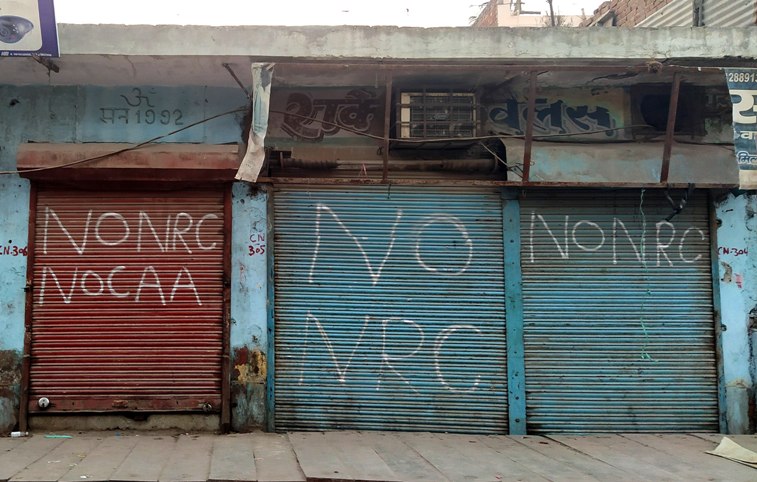 Few people were shot to death on the bridge over the canal, claim locals. One of them was 22-year-old Ashfaq Hussain, an electronics mechanic, who was returning home from work. His aunt Azra Khatun, who has been waiting at the GTB hospital Morgue for Ashfaq's body for four days, says he was married on February 14 this year.

Locals look on with fear at the canal; they claim they saw bodies being dumped there and those may float back to the surface.

Beyond the canal lies a deserted street littered with stones.

Locals have erected barricades made of bamboo at the entrance lanes off main Brijpuri road and inside their small neighbourhoods. The fear is palpable. Some residents, who are still left in the locality, peep through half-open windows, towards the empty street. Police and CRPF carry out flag marches and the ambulance siren is the loudest sound in the vicinity.

Beyond Brijpuri neighbourhood, lies Shiv Vihar – which has now turned into a ghost town.

Almost everyone in this locality – which is completely burnt – has fled their homes. Not a single house, shop or vehicle stands unaffected. The smell of petrol and burnt tyres fills the air. At a car parking, hundreds of vehicles lie gutted in fire. A CRPF personnel points towards the road and I notice that the entire street is covered with ashes, broken bricks, matchboxes and matchsticks. In the dim light of the dusk it looks unreal. The CRPF official says they found cartons of matchboxes which were brought to set fire. 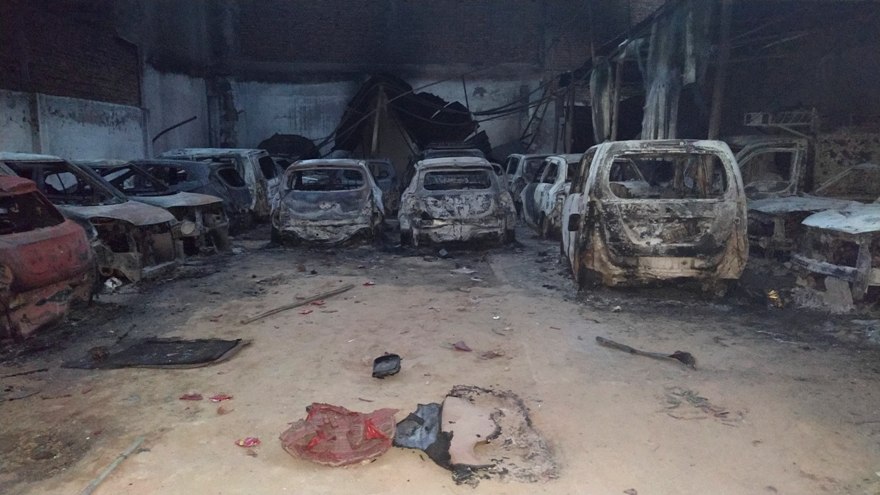 Not just homes and shops, violence consumed schools too. Besides Arun Model School, another school been set ablaze and the third one vandalised. In the dim evening light, DRP Convent School’s courtyard almost echoes the laughter of children who once played there. It is now filled with burnt desks and furniture. Except for few walls where there are remains of bright paint, everything else is blackened from the fire.

A CRPF personnel tells Outlook that attackers hung a rope from the terrace of Rajdhani Public School to enter into DPR School. They used Rajdhani base as a base to throw petrol bombs and stones in the locality, the personnel said.

As the sun sets, the police asked reporters to leave. Locals are not yet allowed to enter this neighbourhood. On the way back, the localities in Mustafabad lay covered in darkness. People are scared to switch on the lights in their homes. Some huddle together in their balconies as dusk engulfs the locality and police patrol the road.

Five days after the communal violence, there is an uneasy calm and fear among people. It may take only a few weeks or months to rebuild homes and restore ‘normalcy’, but it will take really long to restore faith in humanity.