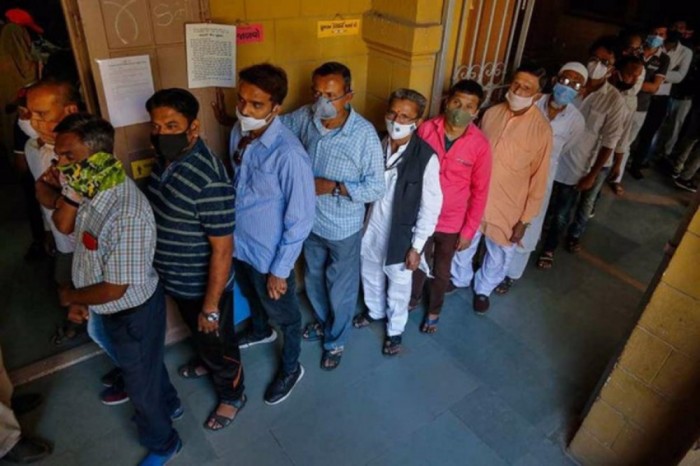 The voting for the Assembly and Parliamentary constituencies bypolls scheduled in five states across the country began on Saturday.

The bypolls for assembly constituencies are underway in the states including West Bengal, Assam, Karnataka, Rajasthan, Haryana and Madhya Pradesh.

Voting began at 7 AM on Saturday for bypolls to the four assembly constituencies of Dinhata in Cooch Behar, Shantipur in Nadia, Khardah in North 24 Parganas and Gosaba in South 24 Parganas districts, an election commission of India (ECI) official said.

In Dinhata, TMC's heavyweight north Bengal leader Udayan Guha is fighting to reclaim the seat which BJP had snatched from him by a whisker in polls held last April.

The by-election at Dinhata were necessitated by the resignation of Nisith Pramanik, now Union Minister of State for Home Affairs, who favoured keeping his Lok Sabha membership over sitting in the opposition in West Bengal's assembly.

Guha, a two-time MLA from Dinhata, is up against BJP's Ashok Mandal, who as a TMC candidate had defeated him, a Forward Bloc candidate then, in 2006.

The EC has deployed 27 companies of central armed forces in Dinhata, 22 in Santipur, 20 in Khardah and 23 in Gosaba, an official said.

Polling for by-elections to five Assam Assembly constituencies began at 7 am on Saturday amid heightened security and strict implementation of COVID-19 protocols.

Some 7.96 lakh voters will decide the electoral fate of 31 contestants, the state election office said.

Polling will continue till 5 pm in the poll-bound constituencies.

Voting began Saturday morning for by-elections to one Lok Sabha and three Assembly seats in Madhya Pradesh, an official said.

As many as 48 candidates are in the fray in four constituencies where straight fights are expected between the ruling BJP and opposition Congress.

Voting started at 7 am and will end at 6 pm, the official said.

Altogether 26,50,004 voters are eligible to exercise franchise during the bypolls.

Of 3,944 polling centres across four constituencies 865 are deemed as sensitive by the administration.

Webcasting has been arranged at 874 polling stations while CCTV cameras have been installed at 361 centres.

Sixteen candidates each are in the fray for by-polls to Khandwa Lok Sabha seat and Raigaon (SC) Assembly constituency.

Voting is underway for the bypolls in Sindgi and Hangal assembly constituencies in Karnataka, election officials said on Saturday.

The polling began at 7 am will go on till 7 pm.

The counting of votes will take place on November 2.

There are a total of 4,39,148 eligible voters, including 230 service voters from both the constituencies, who can cast their votes at 560 polling stations.

Voting for the bypoll to the Ellenabad assembly constituency in Haryana began on Saturday morning, officials said.

Polling began at 7 am and will continue till 6 pm, they added.

The bypoll was necessitated by INLD leader Abhay Singh Chautala's resignation as MLA from the seat in January over the Centre's farm laws.

Over 1.85 lakh voters will decide the fate of 19 candidates in the fray for the bypoll.

A total of 211 polling booths have been set up, and 121 of these have been categorised as vulnerable and most vulnerable, the officials said.

Tight security arrangements have been made for the bypoll with the deployment of 30 companies of central security force, five companies of the Rapid Action Force and the Haryana Police.

Counting of votes will take place on November 2, the officials said.

Voting for bypolls to the assembly constituencies of Vallabhnagar (Udaipur) and Dhariawad (Pratapgarh) in Rajasthan to decide the fate of 16 candidates began amid tight security arrangements on Saturday morning.

The polling began at 7 am in both the constituencies and will go on till 6 pm,an official said.

Counting of votes will take place on November 2, he said.

The bypolls were necessitated by the demise of Congress MLA from Vallabhnagar Gajendra Singh Shaktawat and BJP legislator from Dhariawad Gautam Lal Meena.

A total of 5,11,455 voters – 2,53,831 in Vallabhnagar and 2,57,624 in Dhariawad – will be able to exercise their franchise. Nine candidates are in the fray for the Vallabhnagar seat and seven for Dhariawad, Gupta said.

Voting was underway for by-election to the Tuirial assembly constituency in Mizoram amid tight security on Saturday, officials said.

The bypoll to the seat in Kolasib district is being held after the death of sitting MLA Andrew H Thangliana of Zoram People's Movement (ZPM).

The ruling MNF has fielded K Laldawngliana, while the ZPM candidate is Laltlangmawi. The Congress has fielded Chalrosanga Ralte and BJP K Laldinthara for the by-election.

The contest will, however, be between MNF, Congress and the ZPM.

Voting began at 7 am at 27 polling stations and will continue till 6 pm.

The votes will be counted on November 2 at the Kolasib Government College.

Voting was underway for the by-elections in three assembly constituencies in Meghalaya amid tight security.

Chief Election Officer FR Kharkongor said polling began at 7 am in all the polling stations in Mawryngkneng, Mawphlang and Rajabala assembly constituencies.

The by-elections were necessitated, following the demise of the sitting MLAs of the three seats.

Over 1 lakh voters are eligible to exercise their franchise in the bypolls.

The votes will be counted on November 2.

Voting for bypolls to Mandi Lok Sabha and Arki, Fatehpur, and Jubbal-Kotkhai assembly seats in Himachal Pradesh began at 8 am on Saturday, officials said.

The by-elections were necessitated following the death of sitting members.

Meanwhile, tight security arrangements have been made for the smooth conduct of the by-elections.

State Chief Electoral Officer C Palrasu informed that 50 per cent of the polling stations will be connected through web-casting. This facility will be available in 1,383 of the total 2,796 polling stations, he added.

The counting of votes for all seats will be held on November 2.

A total of 18 candidates are in the fray, including 12 for the three assembly seats and six for the Mandi Lok Sabha seat.

A direct contest is expected between the ruling BJP and Congress on all seats except Jubbal-Kotkhai where rebel BJP candidate Chetan Singh Bragta is trying his luck as an independent candidate.

However, all eyes are on the Mandi parliamentary bypoll as the constituency is the home turf of Chief Minister Jai Ram Thakur.