Amit Shah's announcement is being seen as an attempt not to antagonize voters in Assam ahead of the elections. 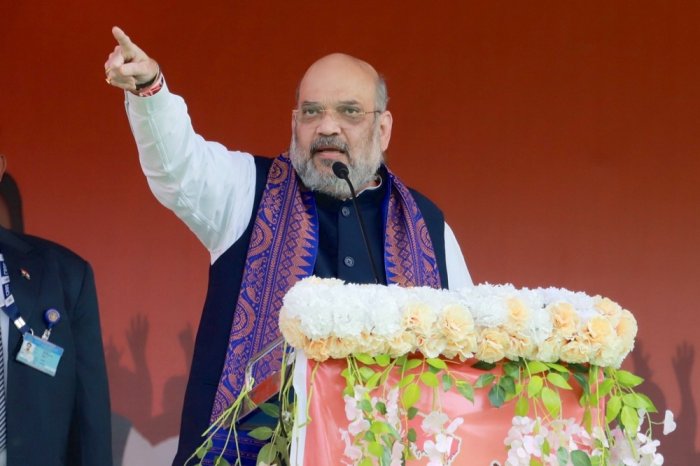 Union home minister Amit Shah on Thursday reiterated in Bengal what he said in the state in November last year—the Citizenship Amendment Act, or the CAA, will be implemented after the government of India completes the Covid-19 vaccination programme.

"Mamata Banerjee said our promise was false. She said citizenship would not be granted to anyone. And then she said she would not allow its implementation. They are spreading all sorts of lies," Shah said while addressing a gathering at Thakurnagar in West Bengal, a Bangladesh-bordering area where the population is dominated by Hindu migrants from Bangladesh.

Thakurnagar is the bastion of the Dalit refugee community of Matuas, who play a determining role in the outcome of more than two dozen Assembly constituencies in south Bengal.

Modi In Bengal: ‘In Mamata’s Rule, Bengal Only Got Nirmamta’

"I assure you that citizenship will be granted once the vaccination programme is over, once we are free from the coronavirus pandemic. We do what we say," Shah said.

It remains to be seen if Shah's assurance would help reduce the prevailing anxiety among the Matua community members.

A majority of the Matua community members wanted the BJP to frame the rules for the CAA before the Assembly elections so that they could assess the provisions and procedures for applying for citizenship under the Act.

"Shah tried to fool the Matuas once more. He gave no timeline. 'After vaccination ends' is as vague as it can get," West Bengal food minister Jyoti Priya Mallick, an influential leader from North 24-Parganas district where Thakurnagar is located, said on Thursday.

The politically influential Matua community members voted overwhelmingly in favour of the BJP in the 2019 Lok Sabha elections, helping them wrest the Bongaon and Ranaghat Lok Sabha seats from the state's ruling Trinamool Congress.

It has been more than a year since the CAA was passed in the Parliament amid protests in the House and on the streets. The centre, after the passing of the six-month tenure for framing the rules, has sought three extensions of three months each, the last of which will end in mid-April.

Framing of the rules is a mandatory step before implementing the legislation and granting citizenship based on this Act.

The CAA is an issue in Assam, too, but there the CAA could put the BJP in a disadvantageous position, whereas, in Bengal they hope to gain from the CAA. It is being perceived that the BJP is going slow on the CAA considering the probable backlash in Assam, where a majority of the Assamese-speaking people are opposed to the CAA.

In West Bengal, The Matua community has remained divided between the Trinamool Congress and the BJP over the past few years. Bongaon's TMC MP was Mamata Thakur, who heads the pro-TMC faction of Matua Mahasangha, the highest religious body of the Matua sect. Mamata Thakur was defeated in 2019 by her nephew-in-law, Shantanu Thakur, who heads the pro-BJP faction of the Mahasangha.

Shantanu had promised the Matua voters that because of the CAA, they need not worry about a citizenship screening drive in the style of Assam that left many Matua members in Assam out of the citizenship list.

Over the past few months, pressure has been mounting on Shantanu Thakur due to the delay in framing the rules. Majority of the Matuas want granting of unconditional citizenship, without having to submit documents declaring self as a migrant from Bangladesh.

The TMC's Mamata Thakur and Jyoti Priya Mallick have repeatedly alleged that the BJP was fooling the Matuas with false promises. TMC has repeatedly said that the self-declaration would land citizenship-seekers in trouble.

The TMC, the Left and the Congress have maintained that documents like voters' ID card, Aadhaar and ration cards were solid proofs of one's citizenship.

Earlier, the West Bengal state Assembly had passed a resolution stating that neither of the CAA nor NRC would be implemented in West Bengal. The Left and the Congress had supported the ruling TMC's motion with this regards in the Assembly.