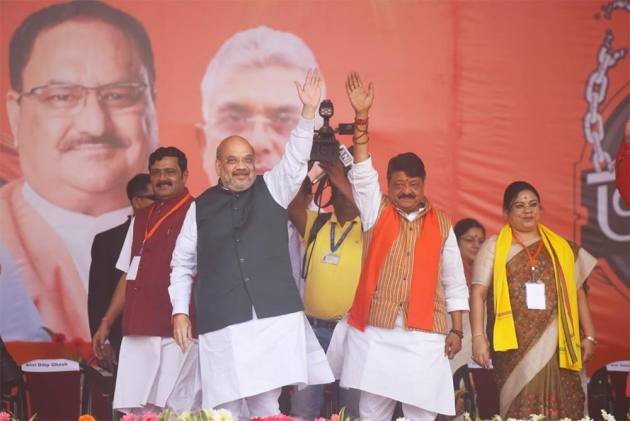 Setting his sights on 2021 Assembly elections, BJP national general secretary Kailash Vijayvargiya said citizenship law implementation will get priority ahead of the polls, as both his party and the Centre were keen on ending woes of the state's refugee population.

Asserting that free and fair polls were not possible without the imposition of President's rule in the state, Vijayvargiya, who is the BJP's Bengal minder, stated that the party, however, is unlikely to raise the matter during Union Home Minister Amit Shah's two-day visit from November 5.

The state unit, nevertheless, would convey its grievances over the recent "political killings" in Bengal and the "politicisation and criminalisation" of some police officers, Vijayvargiya maintained.

Noting that "the National Register of Citizens (NRC) exercise was not up for discussion" as of now, he said the BJP, at the moment, is looking forward to granting citizenship to the persecuted refugees from neighbouring countries.

"Our (central) government has passed Citizenship Amendment Act (CAA) with an honest intention to grant citizenship to the persecuted refugees who have come to our country from the neighbouring nations. But there have been few petitions against the CAA in the court.

"We are hopeful that as and when the (pandemic) situation normalises, there would be a decision. We would try to prioritise CAA implementation before elections in Bengal," Vijayvargiya told PTI in an interview.

Resentment has been brewing among a section of the Matua community people, who have migrated to the state from Bangladesh, over the delay in the implementation of the CAA.

BJP MP Santanu Thakur had recently said he would write to Shah requesting him to quickly implement the law in Bengal to ensure that people from the politically crucial Matua community, of which he is a part, get citizenship rights.

The BJP leadership is apprehensive that the delay and confusion over CAA implementation might turn refugee voters, especially those from the Matua community, against the BJP in the Assembly elections, even though they had voted hands down in favour of the saffron camp in 2019 Lok Sabha polls.

Matuas had been migrating to West Bengal since the 1950s, mostly due to religious persecution. The community, with an estimated population of three million in the state, influences at least four Lok Sabha seats and 30-40 assembly seats in Nadia, North and South 24 Parganas districts.

According to state BJP sources, the CAA will benefit more than 1.5 crore people across the country, including over 72 lakh in the West Bengal.

Referring to the recent attack on Hindu homes in Bangladesh, Vijayvargiya said the CAA was enacted to help persecuted minorities in that country as well as Pakistan.

Talking about the "worsening" law and order situation in West Bengal, Vijayvargiya said, "Free and fair assembly polls next year will be impossible without the imposition of President's rule and asserted that Election Commission needs to ensure people can exercise their rights without hassle."

"However, we won't be demanding President's rule this time when we meet the Union home minister. We would apprise him of the political killings, complain about certain officers involved in illegal activities in the bordering areas."

Asked if the party's state unit was in touch with senior TMC minister Suvendu Adhikari, who had been maintaining distance from the ruling dispensation of late, Vijayvargiya replied in the negative.

"It is an internal matter of the TMC. If Suvendu Adhikari gets in touch with us, we will discuss the take a call. But as of now, we are not in touch with Adhikari," he said, adding that several senior leaders of the state's ruling party are willing to join the BJP but have not been able to do so due to Mamata Banerjee's "reign of terror".

Speaking on the issue of GJM supremo Bimal Gurung's volte-face and switch over to the TMC camp, he said the Gorkha leader's desertion of the NDA wouldn't have much impact as "a large section of the community feels he has betrayed them by joining hands with the Mamata Banerjee-led party."

Gurung, who had been in hiding for the last three years, resurfaced in Kolkata on October 21 and pledged support to the TMC, after having quit the NDA, triggering a spate of rallies and counter-rallies in the Darjeeling hills.

Brushing aside reports of infighting within the state unit, the veteran BJP leader said it is a "trivial matter" and will not affect the party, which has only grown from strength to strength in Bengal.

"We have grown from four per cent vote share to 40 per cent. We are now a mass party in the state. There are trivial issues, which can be sorted out through discussions. It is not a matter of concern," he claimed.

The saffron party, which had a limited presence in politically polarised Bengal for decades, emerged as the main rival of the TMC by winning 18 of the 42 Lok Sabha seats in the state in 2019 general election.

With the BJP's supporter base increasing over the last few years in the state, where it has never been in power, its leaders are hopeful that the party will end the TMC's 10- year-long rule in the upcoming elections.