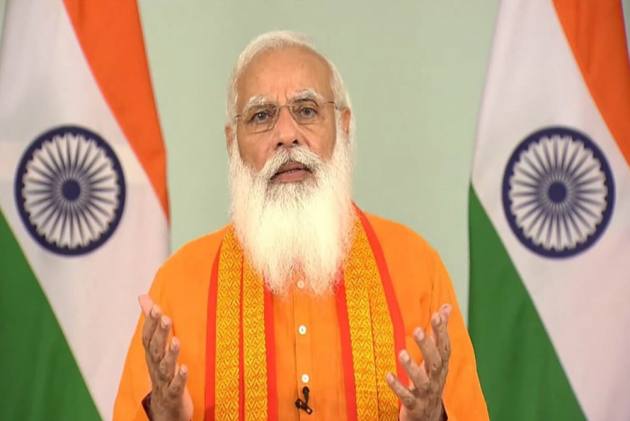 In the run-up to the first major Cabinet reshuffle of Prime Minister Narendra Modi’s government 2.0, some of the potential new inductees in the Council of Ministers met him at his residence at 7, Lok Kalyan Marg.

Sources claim that the PM wanted to give them a heads-up about the possible portfolios to be allotted to them and the high expectations from them. Among those who met PM Modi are Jyotiraditya Scindia, Sarbananda Sonowal, former Maharashtra chief minister Narayan Rane, Kapil Patil (MP from Maharashtra), Meenakshi Lekhi and Apna Dal leader Anupriya Patel. BJP president J.P. Nadda, defence minister Rajnath Singh and home minister Amit Shah were present during the deliberations.

Ahead Of Cabinet Reshuffle, Union Ministers Pokhriyal and Gangwar Resign

Sources in the government say that the emphasis is on a more inclusive team with a record representation of the Dalit community.  Leaders like Ram Shankar Katheria, Shantanu Thakur from the Matua community in West Bengal and Pashupati Kumar Paras may find a place. The Cabinet is also likely to see more women like Anupriya Patel, Meenakshi Lekhi, Heena Gavit and Shobha Karandlaje from Karnataka.

The new Team Modi is also likely to have a relatively younger profile with many of the new possible inductees like Scindia, Lekhi, Heena Gavit, Anupriya Patel and Karandlaje – all below 55 years of age. The name of Varun Gandhi is also being talked about as a probable entry in the Modi Cabinet. The average age of the Cabinet is likely to come down after the rejig.

Major factors that have been considered while inducting new faces in the Cabinet are educational qualification and administrative experience of the leaders. The Council of Ministers may see entry of more domain experts and technocrats. Leaders like Baijayant Panda, a degree holder in engineering and management, may get inducted.

While poll-bound states – especially the politically critical Uttar Pradesh --Uttarakhand, Himachal Pradesh and Gujarat are likely to be the focus, care is being taken to ensure a fair and equitable representation of all regions in the Cabinet. UP is likely to see a lion’s share of inductees. Allies like JD(U) may also get space in the council of ministers.

With PM Modi carrying out a detailed performance assessment of the ministers in the run-up to the reshuffle, some of the non-performers are likely to be dropped. Names of education minister Ramesh Pokhriyal Nishank, minister of state women and child welfare Debasree Chaudhary, minister of chemicals and fertilizers Sadanand Gowda and MoS (independent charge) labour and employment Santosh Gangwar are among those who are being dropped.

There are others like Purushottam Rupala, Anurag Thakur and G. Krishan Reddy, all ministers of state, who are likely to be rewarded and promoted to Cabinet rank.