The central university and its VC Bidyut Chakrabarty had on Wednesday moved the high court seeking orders for the West Bengal police to lift the gherao. 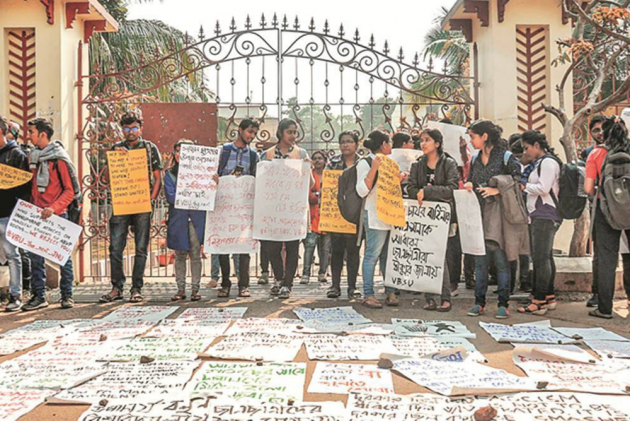 The Calcutta High Court directed restoration of normal functioning at the central university Viswa Bharati with strict restriction for staging of any demonstration within 50 metres of the institution as protest outside the vice chancellor's residence over rustication of three students entered the seventh day.

Police has received an order for removal of  all demonstrations, banners and barricades near the official residence of Vice-Chancellor (VC) Bidyut Chakraborty from Justice Rajasekhar Mantha.

"No demonstration shall be conducted by any student or any person within a distance of 50 metres of any portion or part of the university, particularly the schools, classrooms, the residence of vice chancellor, teachers, professors, officials, staff library, the administrative buildings, laboratories, etc," the court directed.

The central university and its VC Bidyut Chakrabarty had on Wednesday moved the high court seeking orders for the West Bengal police to lift the gherao.

Maintaining that the VC's residence has been under siege since August 27 evening, with him inside, the petitioners stated that the three students were expelled for three years for alleged misconduct.

The university and its VC prayed for appropriate orders directing the West Bengal Police to ensure free ingress and egress at the official residence of Chakrabarty and other administrative offices gheraoed or illegally locked by the agitators.

Justice Mantha said that the court will hear the grievances of the three students on September 8.

The court further instructed the police to make sure that no outsider is allowed to enter the university, while also stating that compliance of its order in the matter will have to be ensured by the superintendent of police, Birbhum district.

It directed that loudspeakers cannot be used on the campus of the prestigious central university, founded by Gurudev Rabindranath Tagore.

Claiming that the agitation was politically motivated, the petitioners have said that the plea was moved challenging the alleged inaction by the authorities in ensuring free movement of the VC.

A section of university students had been protesting outside the VC's residence seeking imemdiate revocation of the expulsion order. A medical team that was called to check on Chakraborty on Thursday was turned away by the agitators.