Varavara Rao's lawyer told the Bombay High Court that the activist was 'almost on his deathbed' with Covid-19 infection and other ailments. 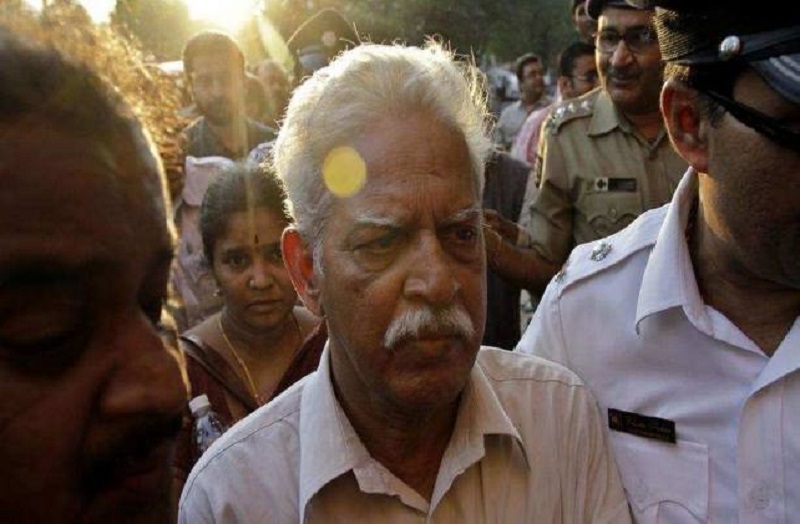 The Bombay High Court on Monday asked the NIA and the Maharashtra government to inform it about the health condition of poet Varavara Rao, an accused in the Elgar Parishad-Maoists links case, and if his family could be allowed to see him "from a reasonable distance".

The directions came after Rao's lawyer told the court that the activist was "almost on his deathbed".

Rao, 81, is currently admitted in the Nanavati Hospital Mumbai. He tested positive for coronavirus earlier this month and is also suffering from several other ailments.

A division bench of Justices S S Shinde and S P Tavade asked the National Investigation Agency (NIA) and the state to inform the court about Rao's health condition and clarify by
July 22 whether his family members could be permitted to see him.

Rao's lawyer Sudeep Pasbola told the court that the activist was "almost on his deathbed" and that if he were to die, it should be in the presence of his family.

"His condition is very serious. He hit his head against the hospital bed while he was at the J J hospital and sustained severe injuries. Besides COVID-19, he suffers from several ailments, he is hallucinating and is delirious," Pasbola said.

"His days are numbered and if he is to die, at least let him die in the presence of his family members," the lawyer said while seeking that Rao be granted bail.

Pasbola said Rao was in no condition to cause any prejudice to the probe in the case and even the NIA could not dispute this fact.

The bench, however, asked if Rao was in such a critical condition, wouldn't it be counterproductive to move him out of the hospital, and take him to any other place?

"Also, if he has COVID-19, then how can he meet his family?" the court asked.

To this, Pasbola said if permitted, Rao's family could take precautions, and see him from a distance.

The state's counsel, Deepak Thakare, told the high court that it could arrange for video-conferencing facilities for Rao's family.

Additional Solicitor General Anil Singh, who appeared for the NIA, said as far as he knew, "COVID-19 patients could not be permitted to meet anyone".

He also said Rao had been admitted to "one of the best multi-speciality hospitals in the city," and that he was being taken care of in accordance with guidelines of the Indian Council of Medical Research (ICMR).

"We are providing the best treatment to him, all his medical needs are being attended to and we are following ICMR guidelines in treating him for COVID-19," Singh said.

The court, while seeking details from the NIA and the state, said, "Can his family members see him from a reasonable distance in the hospital?"

Rao earlier filed two pleas in HC through his lawyer.

One was to direct the state to produce all his medical reports from the state-run J J Hospital, where he was admitted in May but discharged hurriedly on June 2 and sent back to Taloja jail in neighbouring Navi Mumbai.

The other plea sought bail on health grounds.

The same bench also heard a petition filed by Rao's co-accused in the case, activists Vernon Gonsalves and Anand Teltumbde, seeking that they be tested for COVID-19 as they had been in close contact with Rao in the jail.

The court directed the prison authorities and the NIA to respond to the plea by July 23.

"The prayer in the petition is limited. You (authorities) carry out the test for COVID-19 and see. If they are negative then good," the court said.

It noted that they (Gonsalves and Teltumbde) are lodged in the Taloja jail where there have been cases of inmates testing positive for coronavirus.

Besides, the hearing on the plea of activist Sudha Bharadwaj, also an accused in the case, seeking bail on health grounds was adjourned after the court found the Byculla women prison superintendent's report on her health to be "illegible".

Her plea will also be heard on July 23.

Bharadwaj has been in jail since September 2018. She applied for bail on health grounds after an inmate at the Byculla prison tested positive for coronavirus last month.

Rao and nine other activists were arrested in the Elgar Parishad-Maoist links case, which was initially probed by the Pune Police and later transferred to the NIA.