"This is a blot on all legislators including men. We cannot remain silent spectators to it. We have to speak in one voice that this is unacceptable," Union Minister Smriti Irani said. 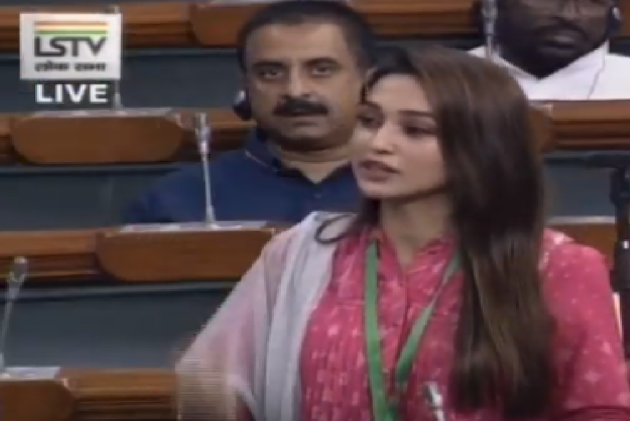 During the Zero Hour, Union Textiles Minister Smriti Irani said the remarks of Khan in Lok Sabha on Thursday during the debate of Triple Talaq Bill were a "blot" on all legislators, including men.

"This is a blot on all legislators including men. We cannot remain silent spectators to it. We have to speak in one voice that this is unacceptable," Irani said.

Irani added, "The entire nation watched yesterday what happened. This House passed the Sexual Harassment of Women at Workplace Bill. I appeal to all to speak in one voice- You cannot misbehave with a woman and get away with it by just dramatizing it."

Finance Minister Nirmala Sitharaman also demanded exemplary action against Khan over his remarks and called it an "utterly condemnable conduct".

"It is an abominable act... I appeal to you Speaker sir, like the way it was suggested, I think it is important. You are empowered adequately... In this particular case, every member of the House has felt strongly, we look towards you for an exemplary action in this matter... so that never ever women will be politicized or women will be treated badly or abused," Sitharaman said while speaking in Lok Sabha.

BSP supremo Mayawati slammed Azam Khan for his sexist remark against MP Rama Devi in the Lok Sabha, saying he should not only apologise in Parliament but to all women.

"The indecent language used by Azam Khan, an SP MP from Uttar Pradesh, against a woman presiding officer in Lok Sabha yesterday hurt the dignity and honour of women, and is very condemnable. For this he should not only apologise in Parliament but to all women," Mayawati said in a tweet.

Rama Devi, who was officiating the proceedings in Lok Sabha yesterday, also condemned Azam Khan's sexist remark against her and said she would request the Speaker of the House to dismiss him.

Supporting other MPs, Union Law Minister Ravi Shankar Prasad said either Khan should tender an apology or he should be suspended from the House.

Raising the matter during Zero Hour, BJP MP Sanghmitra Maurya said: "What happened in the House on Thursday was undignified. Azam Khan has to come to the House and apologise."

Union Minister Babul Supriyo said that though Khan's remarks were expunged, TV channels had showed them and the entire country has watched.

BJD member Bhartruhari Mahtab called Khan's remarks "unpardonable" and sought exemplary action against him, while Congress MP Adhir Ranjan Chowdhury said the issue should be referred to the ethics or privileges committee of the House.

Congress leader in the House Adhir Ranjan Chowdhury said action should be taken against anyone demeaning women and raised the issue of members using objectionable words against Sonia Gandhi in the past.

Lok Sabha is also likely to pass a resolution favouring "exemplary" action against the SP leader.

Leaders across party lines are of the view that a message should be sent that the House has zero tolerance towards such acts which lower the dignity and honour of women.

The resolution is likely to be moved by Parliamentary Affairs Minister Pralhad Joshi and is expected to be supported by leaders across party lines.