Automobile accessories dealer Mansukh Hiren, who was in possession of the vehicle, was found dead in a creek in Thane on Friday morning. 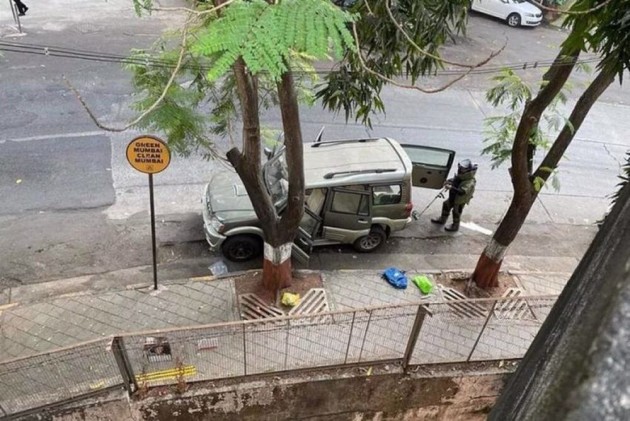 The Forensic Science Laboratory (FSL) at Kalina in Mumbai will check the car for any blood stain, hair, or any other clue for the identification of the person who drove it and those present in the vehicle when it was parked near Antilia, an official said.

The lab will submit its report to police in a week, he added.

The car, a Scorpio, with 20 gelatin sticks inside was found near 'Antilia', Ambani's multi-storey residence in south Mumbai, on February 25. Police had said the vehicle was stolen from Airoli-Mulund Bridge on February 18.

The vehicle and the gelatin sticks were sent to the forensic lab on Friday, an FSL official said.

The lab will find out what was the percentage of gelatin in the sticks, the official said.

The FSL, with the help of experts, will also try to find out if the chassis number of the car was changed, to help identify the real owner of the vehicle and in whose name it was registered, he said.

The forensic lab has taken the case on priority and will submit its report in a week, the official said.

The FSL's general analytical division, and the DNA and physics departments will work on the case, he added.

Automobile accessories dealer Mansukh Hiren (46), who was in possession of the vehicle, was found dead in a creek in neighbouring Thane on Friday morning.

Prior to his death, Hiren had said in a statement recorded by police that when he was on the way from his shop in Thane to Crawford Market in south Mumbai for some work on February 17, the vehicle's steering got jammed.

He left the car on service road in Vikhroli and took a cab, he said.

After finishing work, he met a friend and returned to Thane in his car, he told police.

The next day he found that the Scorpio was missing and lodged a police complaint, Hiren had told the media.

While the police had maintained that Hiren owned the car, Maharashtra Home Minister Anil Deshmukh said in the state Assembly on Friday that he was not the owner.

The real owner had handed it over to Hiren for some interior work, Deshmukh said.

The Maharashtra Anti-Terrorism Squad (ATS) has taken over the probe into the entire matter. The viscera of Hiren has also been sent for forensic analysis, police said on Saturday.

The autopsy report of Hiren reserved the opinion on the cause of death, officials earlier said.