A video of a car sinking into a well has been going viral over social media after the monsoon hits Maharashtra. 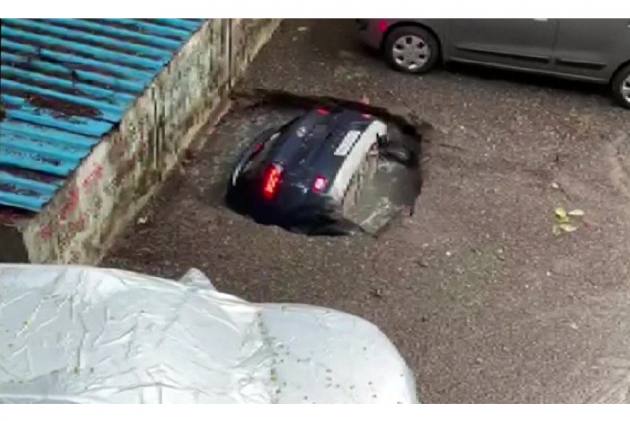 A video showing a vehicle plunging into a pool of water in Mumbai after the concrete floor on which it was parked caved in went viral on social media.  The incident took place at the Ram Nivas society located at Kama lane in Ghatkopar West area on Sunday morning, police said, adding no one was injured.

A crane was used to pull out the car in the night, a civic official said.

The video shows the car's bonnet and front wheels entering the sinkhole first. The rear part of the car follows and soon the entire vehicle disappears in the water.

Southwest monsoon advances into parts of Haryana, Punjab ahead of schedule

The other vehicles parked near the car, including one right next to it, were not affected.

Responding to the viral video, the BrihanMumbai Municipal Corporation (BMC) said the spot where the car sank used to be a well but was partially covered with cement concrete by the housing society.

There was a old well which was later covered by a cement slab above it pic.twitter.com/dZLEyIaTv5

“The housing society had covered a well with reinforced concrete cement and residents were using the area to park their cars. A police team reached the spot and brought the car out of the water body. The spot has been cordoned for the safety of residents," an official said.

Some years ago, the housing society had closed half the portion of the well by carrying out RCC work and used the spot to park the vehicles. However, due to rains, the portion caved in, and the vehicle drowned, he said.

The BMC refused to take responsibility for the incident which followed a spell of heavy rains in the city.

In a statement, the Shiv Sena-controlled municipal corporation stated it has nothing to do with the incident.

The municipal corporation said, "There is a well in the premises of this society. It was covered by RCC on half the portion. The residents of the society used to park their cars in that area. Preliminary information shows that a car parked on the spot was submerged."

The society has been asked to take necessary safety measures immediately, the BMC said.