Caravan Of Migrants Sets Out On 1,000 Km Journey To Home; Woman Delivers Baby On Roadside

The group, including 20 children and five women, braved heat and storms, and rested in the shade under trees and wherever they could find a quiet corner. 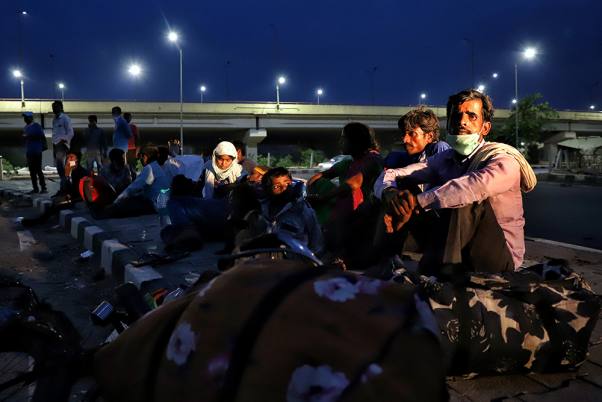 Evicted by their landlords, 48 migrant labourers, including one in an advanced stage of pregnancy, set out on a 1,000 km trek home to Madhya Pradesh from Haryana's Ambala a fortnight ago.

The group, including 20 children and five women, braved heat and storms, and rested in the shade under trees and wherever they could find a quiet corner.

The labourers caught the attention of locals and media as they stopped to rest in roadside hutments at GT Road in Masoodabad here on Wednesday after covering a distance of nearly 350 km.

Recounting her harrowing experience, 28-year-old Maan Kumari said she gave birth on the roadside somewhere between Ambala and Aligarh and she had already walked at least 150 km, braving the summer sun and thunderstorms, with her newborn in her arms.

The group sought shelter in the veranda of some closed shops here.

Maan Kumari's husband Sanjay claimed that policemen were mounting pressure on them to move out. However, some good samaritans intervened and the local authorities made arrangements for them to stay at a shelter.

Maan Kumari and another woman Phoolwati said all through the way, good samaritans offered them food and water, without which they would not have made it this far.

Later on Thursday, the district authorities made arrangements to take the labourers to their native villages in Madhya Pradesh's Singrauli district.

Additional District Magistrate (City) R K Malpani told PTI that as soon as the district authorities came to know of the plight of these migrants, transport was arranged for taking them to their destination free of cost.

They were also provided essentials like food and other things for the onward journey, he said.

Rendered jobless due to the coronavirus-induced nationwide lockdown, which began on March 25, and desperate to get home, migrant workers across the country are undertaking long and arduous journeys to their native places on foot, on bicycles or packed into trucks.

This, despite the Centre allowing special trains for stranded migrants who wish to return to their native places.

According to officials, the railways has ferried home more than 11 lakh migrants on 932 special trains since May 1.