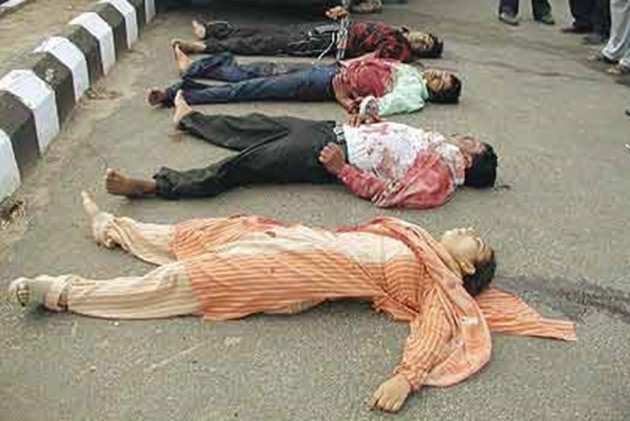 Three police officers were discharged by a special CBI court on Wednesday in the 2004 Ishrat Jahan alleged fake encounter case.

"The CBI has not mentioned anything specific against the sanction order (in which the Gujarat government declined sanction to prosecute the three accused) which also leads to believe the act of applicants/accused was in discharge of official duties," the court observed.

The Central Bureau of Investigation (CBI) on March 20 conveyed to the court that the state government had declined sanction for prosecution of the three accused.

The court in its October 2020 order observed that they had "acted in their official duties," so the probe agency was required to obtain sanction for prosecution.

Under section 197 of the Criminal Procedure Code, sanction is required for prosecuting government servants for anything done in the discharge of official duty.

Ishrat Jahan, a 19-year-old woman from Mumbra near Mumbai, was killed along with Javed Shaikh alias Pranesh Pillai, Amjadali Akbarali Rana and Zeeshan Johar by Gujarat police in an 'encounter' near Ahmedabad on June 15, 2004.

The police claimed the four were terrorists who were planning to assassinate the then Gujarat Chief Minister Narendra Modi.

However, a high court-appointed Special Investigation Team concluded that the encounter was fake, after which the CBI registered a case against various police officials.

Inspector General of Police Singhal, retired police officers Barot and J G Parmar, and Chaudhary had filed applications before the court seeking dropping of proceedings for want of the requisite sanction to prosecute them.

Parmar died during the course of hearing in the case.

On Wednesday, the judge said when this court earlier observed that the act of the accused was while discharging official duties, nobody challenged the order.

"Not only that, but the Central Government and the Government of Gujarat have also believed that the act of the applicants/accused is while discharging the duties and therefore, the government was moved for sanction and the sanction is refused also," the court observed.

There is nothing on record, even prima facie, to suggest that the victims were not terrorists and the IB inputs were not genuine, the court said in its order.

"The CBI has not mentioned anything specific against the sanction order which also leads to believe the act of applicants/accused was in discharge of official duties," it said.

The court also refused to accept the argument put forth by Special Public Prosecutor for the CBI, R C Kodekar, that the govermnent order declining sanction to prosecute the three applicants was issued without the application of mind.

In 2019, the CBI court dropped proceedings against former police officers Vanzara and Amin, after the state government refused sanction to prosecute them.

Earlier, in 2018, former in-charge Director General of Police P P Pandey was discharged from the case.

The court on Wednesday discharged Singhal, Chaudhary and Barot from offences under IPC Sections 120-B (criminal conspiracy), 341, 342, 343 (all for wrongful restraint), 365 (kidnapping or abducting with intent secretly and wrongfully to confine person), 368 (wrongfully concealing or keeping in confinement, kidnapped or abducted person), 302 (murder) and 201 (causing disappearance of evidence of offence).

They were also discharged under sections 25(1)(e) and 27 of the Indian Arms Act.